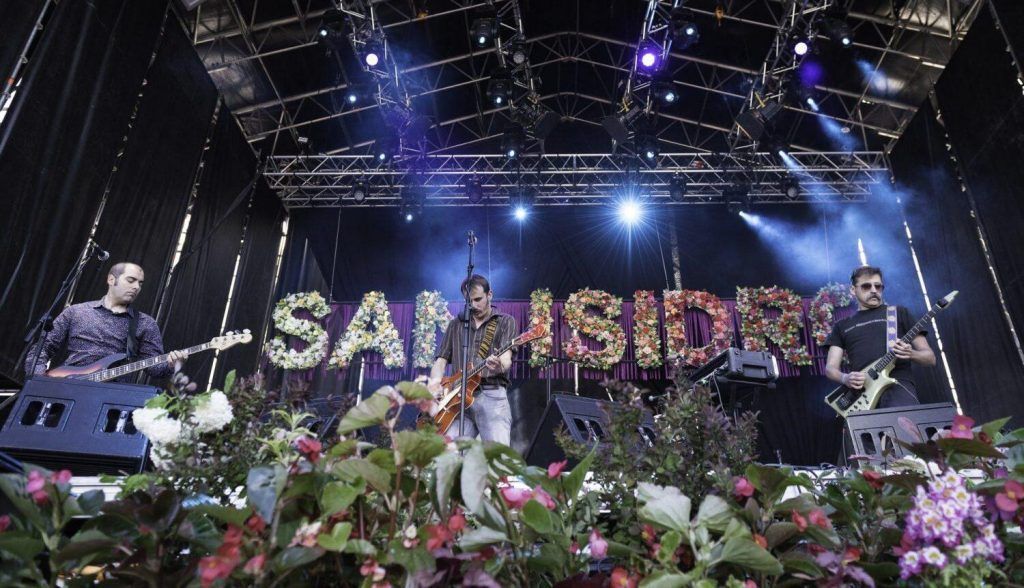 SAN ISIDRO FIESTAS: A TASTE OF TRADITION IN MADRID

What’s that you say? A party? In Madrid? Well, we N-E-V-E-R!! That’s such a surprise, hey? Alright alright, enough with the sarcasm. As we know by now, Madrid is certainly known for taking to the streets and starting a party at the drop of a hat. But THIS isn’t just your average fiesta, amigos.

If there were a festival that summed up everything about Madrid, from the most authentic roots to its fun and vibrant essence, it would be the Fiestas de San Isidro. These festivities start on May 10th all the way through to May 15th, when the city erupts in celebration in honor of Madrid’s history and traditions, and everything the city has gone through and overcome to become the exciting hub of activities it is today. 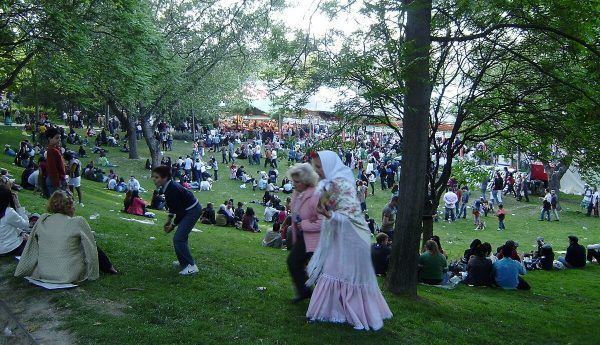 Everyone can enjoy the San Isidro celebrations, from the city’s most recent newcomers to Madrid’s finest locals, the “Gatos”*. So, let’s give you a bit of context, shall we? San Isidro? Who dat??

*GATOS: Fun snippet of info – True Madrid natives are referred to commonly a “Gatos”, which is Cats in Spanish (We didn’t get our name from nowhere!). Only someone born in Madrid whose parents and grandparents were also born and bred here can claim the “Gato” title. This story dates back to when the Christian crusade took over the city in 1085, but we’ll get to that another time.

Every year on May 15th, Madrid and all its inhabitants commemorate the ancient miracles performed by the city’s patron saint, San Isidro Labrador.

BTW: A patron Saint in Spain is a religious figure that is worshipped by a group of people in a district or village, because these patrons are said to have a direct link with the Almighty God.

This particular patron saint was around in 1080, and apparently helped out the area’s agricultural scene. Legend has it, he was able to make gushing water appear with his very hands by striking the ground. Many other stories of miracles surround this mysterious character. Kinda like The Avengers, but the Catholic style.

So now we’ve made acquaintances with our good old Saint Isidro, let’s leave everyone to interpret the true meaning of these Fiestas however they may choose, hey? We are, without a shadow of a doubt, entering the most charming festivity that Madrid has to offer. This yearly event is all about having fun and enjoying this wonderful city. As everything in Madrid tends to do, the San Isidro fiestas have evolved over the years to offer activities of many shapes and sizes, to appeal to every and any crowd.

So, put your chulapo* outfits on my friends, it’s time to find out about the BIG PLANS AHEAD FOR SAN ISIDRO 2023.

*CHULAPO/CHULAPA: People that lived in the historic territory of Madrid back in the XIX century were referred to as Chulapos or Chulapas. The San Isidro Fiestas are typically full of locals dressed as these ancient Madrileans in their Chulapo outfits, dancing and enjoying themselves like they own the place. 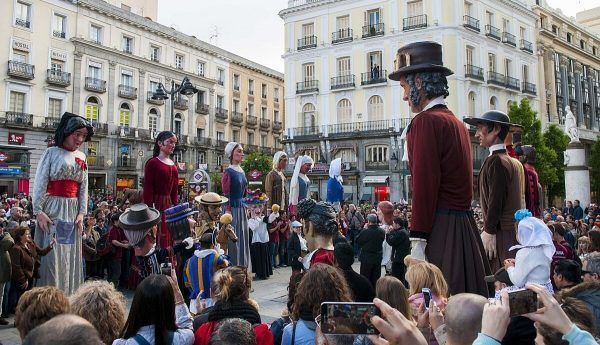 The most traditional way to spend San Isidro (which all visitors must experience, of course) is making your way to the Pradera de San Isidro, a large park on the outskirts of the river.

This is where you’ll find yourself in the heart of all the festivities, and where people have gathered for centuries to visit the patron saint in pilgrimage

As the years have gone by, the religious meaning of the San Isidro fiestas has lost its significance slightly. Now, the event is considered to be one of the best moments of the year to simply fall in love with Madrid all over again, while grabbing a beer and relaxing on the grass with a couple of friends, enjoying the music from concerts and performances that are organized for the occasion.

Make sure you try the local delicacies while you’re at it. Go for the “rosquillas” (either plain or sugar-coated) if you have a sweet tooth. If you’re more into savoury, try the “galinejas” or “entresijos”, two meaty dishes made with lamb’s innards. Only for the adventurous! 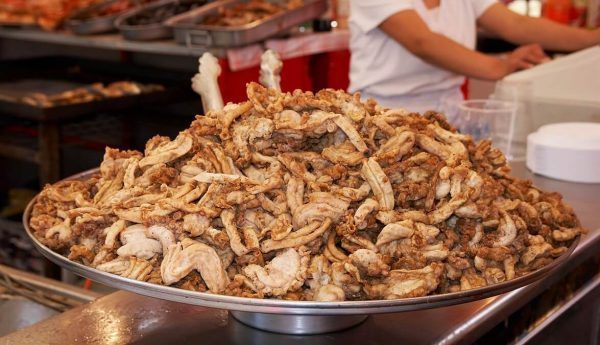 To wash down all this delicious new food, you can also try the typical “limonada” which is always on sale, which is a mix of wine, lemon juice, sugar, and fruits. What’s not to like?

No San Isidro plan is complete without the odd “chotis*” dance! Many groups of chotis dancers will boogie the night away in their typical chotis gear (not to be confused with flamenco dances, read: Best Flamenco Show Madrid)

*CHOTIS: Thi world actually derives (somehow) from the word “schottisch”, which means Scottish person in German. The concept of chotis came to Spain in 1850 with the arrival of the typical German Polka dancing. The Madrileños came up with their own version of this dance and, low and behold, the chotis was born. It now represents a symbol of the San Isidro fiestas. It can be danced in pairs, with each person facing the other, as the woman dances around the man, who keeps his feet perfectly still as he is spun around by his partner. 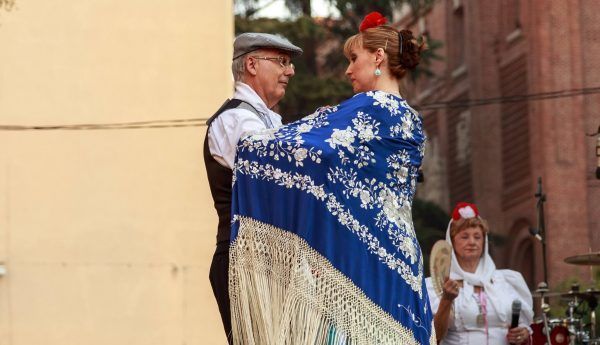 Now you’ve been informed on how to follow the proper San Isidro traditions, here are a few other plans that might be better suited to your own style. This next option is certainly a strange mix of cultures. For the fifth year in a row, the Sound Isidro festival brings the latest musical trends onto the scene during the most traditional festivities the city has ever seen. You’ll be dancing to the latest tunes while wearing your mantón de manila*!

*MANTÓN DE MANILA: The ‘Manila shawl’ is the best-known garment worn by Madrid’s chulapas. Originally created in the ancient China of the year 600, this piece of clothing actually found its way to Spain through trade routes that passed through the Philippines Islands (hence the name), which was former Spanish territory. Since the XVIII century, it has been a national symbol, with broad representation throughout in all the great artistic genres.

From the 8th of May through to the 2nd of June, the city’s most emblematic concert halls fill up with eager attendees ready to enjoy a wide variety of musical performances of the modern kind. Trap, Indie, Electronic music, you name it, they’ll have it. Artists like Javier Mena, Sticky M.A, Babasónicas, La Estrella de David, Cupido and Get Up Kids will headline this year’s festival. It’s called getting with the times, and we love it. 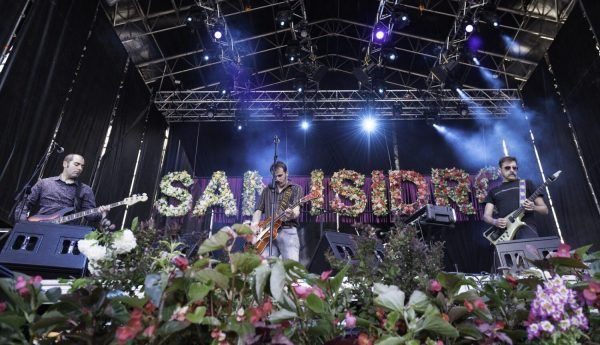 Right, so, we’ve seen a bit of the traditional folklore stuff, a touch of the modern musical offerings… But it doesn’t end there! San Isidro is non-stop fun for everyone. In addition to Sound Isidro, another huge venue for shows and performances is the Las Vistillas Park. Again, a great variety of artists and genres are expected here, from the most classical pasodobles to the newest DJs on the scene. Don’t forget to keep Las Vistillas in mind for your San Isidro plans.

Be prepared to revel in the utter randomness of San Isidro in Las Vistillas. There’ll be cocido madrileño (tasty stew) galore, people pouring into the nearby parks and streets for the parades and, if last year is anything to go by, you might even be treated to a ‘poetic twerking’ show. Don’t even ask, there is literally no valid explanation for this mayhem. You’ll simply have to see for yourselves. 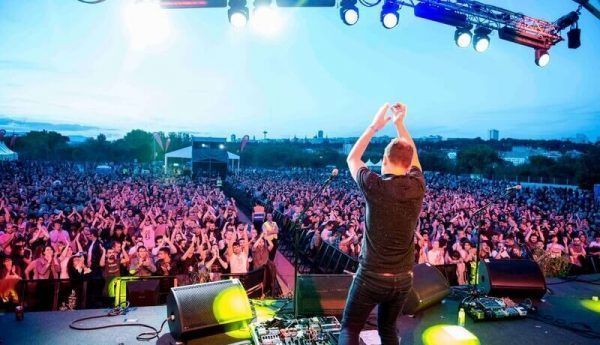 Well, getting to the end of our list (but not quite yet), here we have the Las Ventas happenings. Let’s see this as the huge pink elephant in the room, that no-one typically acknowledges even though it’s right there.

That’s right, this is where bull-fighting fanatics come to celebrate their own San Isidro.

Controversial as it may be, this is a key event on the agenda and one of the many popular attractions in Madrid. The greatest figures of the “art” of bull-fighting gather in what is today considered the most important bull ring in the world: Las Ventas.

Each to their own. 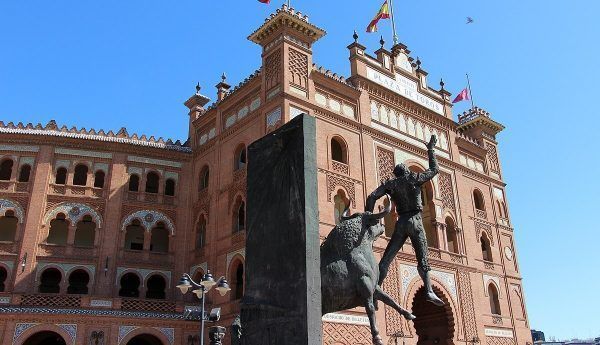 Here at Cats, we have a few tricks up our sleeve to bring the most authentic fiesta to life!

Our Free Walking Tour will tell you all you need to know about the San Isidro festivities and what ambiance to expect when adventuring head-first into the many celebrations on offer. The bubbling and vibrant excitement from the streets always seems to make its way into our hostel parties! Although, who could blame anyone for joining our amazing shindigs, even if we do say so ourselves. It’s what we do best!

Don’t miss out! Go have fun!