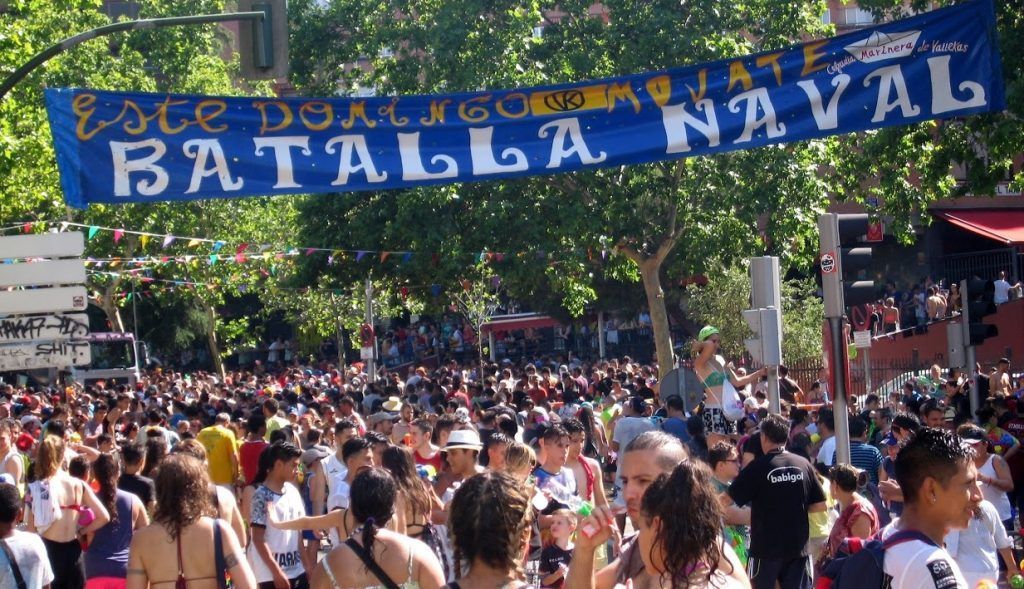 So, the time has come to introduce Madrid’s hidden gems: popular festivals. For those of you ‘rookie’ travelers, don’t worry, we’ll explain every new concept as we go along, for educational purposes. You could say we’ve come up with THE OFFICIAL MADRID FESTIVITY DICTIONARY. Let’s get going!

In Spain, patron saint festivals and popular festivals are way more of an established tradition than siestas and paella combined! (Click here to know where to eat the best paella in Madrid).  Historians say that these festivities date back to the 16th century (zero exaggeration here), when Spanish towns performed rituals in honor of their very own patron saint or virgin*, which they adored.

Anyway, moving swiftly on! As the years went by (and progress started creeping into Spain) the religious part of these festivals started to disappear, leaving mostly the more modern celebration/folklore definition.

Nowadays these festivals are entwined into every Spaniard’s DNA. Madrid is the perfect scene for popular festivals because they showcase our city’s lifestyle philosophy. In a way, us madrileños are just like our festivals: open, warm, fun and complete suckers for a good old time.

Summer is, of course, the perfect time for celebrations. Madrid sizzles each year with the summer heat, welcoming all visitors and seducing them to enjoy the nighttime breeze at its buzzing open-air parties, known as VERBENAS*.

*Verbena: Spanish fiesta in its most traditional sense. Dancing meets music, drinks, fun, games and food in the open air. Good vibes all around! You’re gonna wanna learn this word!

Let’s quickly go over the basics in terms of our popular festivals, so you can get familiar with the lingo. As you can probably imagine, in Spain the streets are where it’s at. Lifelong neighbors join hands with the newcomers and take to the streets to let their hair down and escape from the daily routine.

These festivities = music + dancing. Classic golden oldies, folklore songs and the odd latest number will be blaring from the stereos, to keep everyone happy! Youngsters, older generations and entire families can practice their best moves at a typical Spanish orquesta* or discomóvil* (basically musical performances on a stage).

*Orquesta or Discomóvil: The two main musical features at Spanish popular festivals. An “Orquesta” means live music and dancers on a brightly and colorfully lit stage. A “discomóvil” is a traveling van turned into a stage that rolls into every town, bringing the best tunes.

When it comes to food, Spanish popular festivals are the birthplace of street food, but traditional-stlye… none of this hipster stuff! We’re talking sandwiches, classic specialties like pig’s ear, sausages and chips (salchipapas*), padrón peppers or bravas fries, and not to mention all kinds of meat. Popular prices all around. Perfect for tucking into on the street or at huge shared tables. Beer, sangria and calimocho* are the perfect pairing. Oh la lá!

*Salchipapas and Calimocho: THE iconic Spanish festival food and drink, respectively. Salchipapas, as you would think, is a marvelous combination of sausages and fries. Calimocho is originally from the Basque Country (up north), and is a wonderful concoction made by mixing red wine and coca-cola. The both of them have made memorable nights and caused quite the hangovers since the 70s.

For the young hearted, the conventional fairground-style game stands are the cherry on top. Target shooting, crazy penalties, tombolas*, and even funfair rides are regulars at popular festivals.

*Tombola: public draw (not the most legit) where you can score all kinds of prizes, from stuffed animals to TVs. You buy a ticket, and wait for your number to come up! The classic announcements blasting from the loudspeaker will be cringeworthily unforgettable… promise!

Madrid: home to the most authentic festivals

Madrid is a gigantic puzzle, put together by 21 districts and 131 “barrios” or neighborhoods. Each one has its own festivities, of course, which mostly take place during the long summer months. Allow us, fellow travelers, to recommend a few of the most outstanding popular festivals, all with CATS seal of approval!

You’re just in time to enjoy a few this summer, but, if you want to experience all of these, you’ll just simply have to come visit again another time (oh DEAR, what an utter SHAME, right?).

The Centro district, the jewel of downtown Madrid, kicks off the popular festival season with its Fiestas del 2 de Mayo (yep, you got it, 2 May Festival). The modern Malasaña neighborhood gets historic, commemorating the uprising of the people of Madrid against Napoleon and the French some 210 years ago. Since 2007 the residential community has organized and managed these entire fiestas. A perfect way become a part of the traditional Spanish barrio.

Parque de la Bombilla has found a place in every madrileño’s heart for hosting the Fiestas de San Antonio de la Florida. One of the city’s most well known and loved verbenas comes to life every year near Príncipe Pío train station. Mid-June is when the magic happens, so make sure you’re ready for the fun to come!

Moving towards the end of June, we enter the San Juan fiestas. Celebrated all over Spain, this festival finds its home in Madrid’s Retiro district. After a ten-year break, the community has revived this beautiful tradition. It’s comeback featured even more concerts, children’s games, Spanish zarzuela*-style musical shows and not to mention spectacular verbenas.

*Zarzuela = a Spanish lyric-dramatic genre that alternates between spoken and sung scenes.

These two neighborhoods could not be more different, yet they both celebrate their popular festival during Las Fiestas del Carmen in mid-July. The stately (rather posh) Chamberí district offers concerts, sports events and culinary delights at its fiestas. Vallecas, on the other hand, has more of a rogue feel to it. The streets get soaked at the famous water gun war, known as “Naval Battle of Vallekas”.

The emblematic areas of Lavapiés and La Latina take over in August. San Cayetano, San Lorenzo and La Virgen de la Paloma festivals fill every nook and cranny in the city’s ancient and most traditional zones with laughter and excitement. The neighbors take their decoration duties very seriously. Traditional dancing, water battles, micro-theatre, charangas everywhere, and street concerts will sprinkle cheer all around!

Charanga: couldn’t get anymore old-school… It’s a music band that charges through the streets playing their tunes as loudly as possible, followed closely behind by the rest of the partygoers!

September brings the Fiestas de la Melonera to the Arganzuela district, an upcoming and modern area, perfect for leisurely walks through the new Madrid Río park. Madrid’s unique Matadero building will host the celebration that will see out the summer, with amazing fireworks and unforgettable parties.