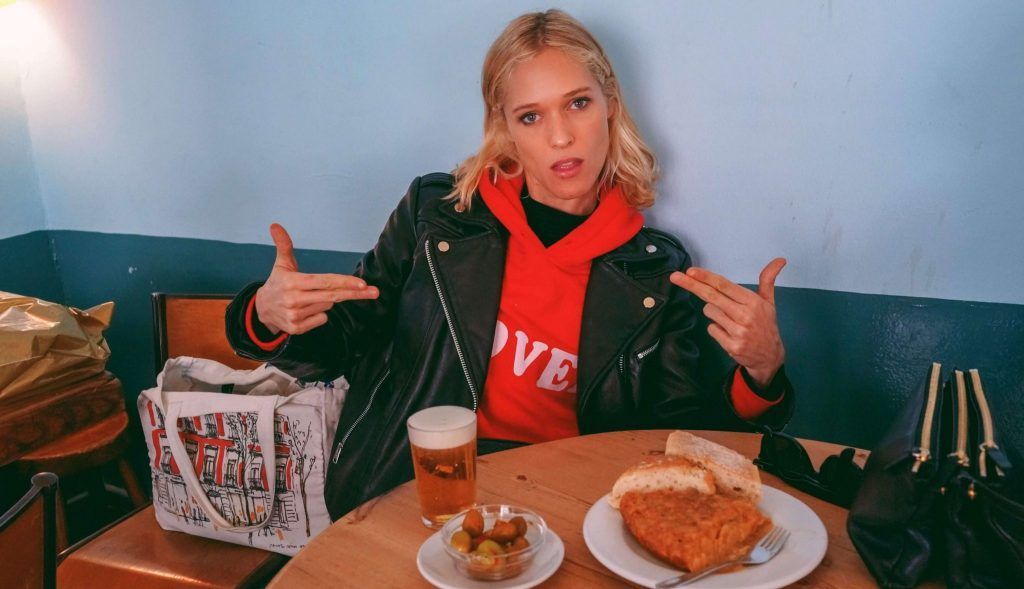 DON’T MISS THE 10 BEST TAPAS IN MADRID ACCORDING TO THE LOCALS!

One of Spain’s favorite sports is to go out for tapas in a group, let’s say, to do a tapas crawl. And Madrid has numerous areas to go out and practice ‘tapeo’: Sol, Huertas, La Latina and the infamous Cava Baja street, Plaza Mayor and its surroundings… and many others! More and more restaurants with international food have opened in the city, but the traditional places for tapas are those that win the hearts (and the stomachs) of Madrilenians and visitors.

The best tapas in Madrid and where to taste them 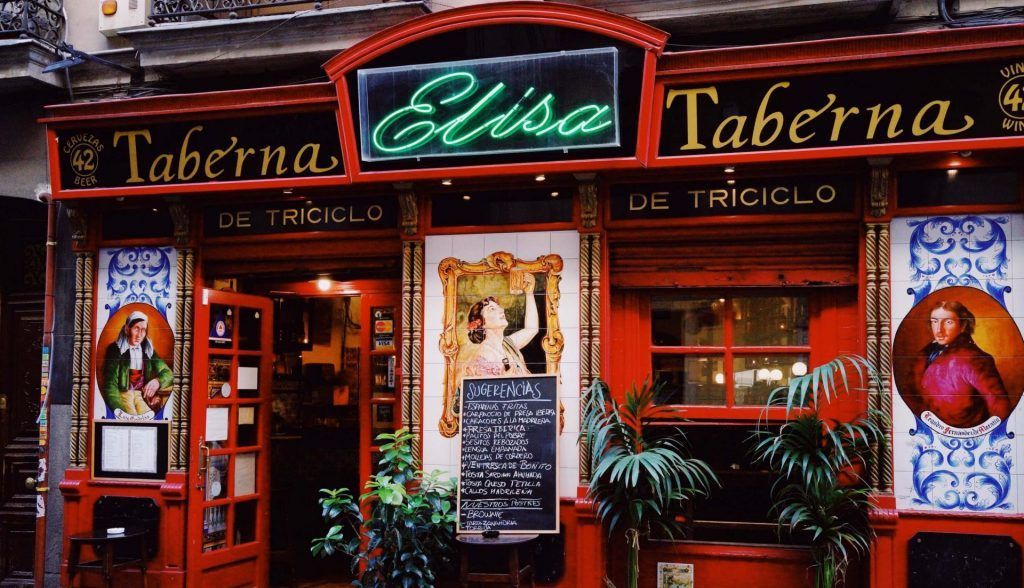 While Madrid is famous for its Michelin star restaurants and top cooks, such as Chef Sergi Arola, we also have lots to brag over our local and much cheaper cuisines that we love just as much (and sometimes even more)! Tapas allow our taste buds to experience the same great flavors of Madrid while sharing with our loved ones (or even by ourselves, no judgment here)!

1. ONE OF THE BEST TAPAS IN MADRID: CALAMARI SANDWICH

The most famous fast food in the city is our fried calamari sandwich. Squid inside slices of baguette? Yup, and people line up to buy one. Don’t worry though, the line moves very fast. Most of best calamares tapas bars in Madrid are around Plaza Mayor. So, you can eat your sandwich while sitting in the square. It’s just something you cannot miss.

It’s a pretty caloric snack, like almost all the tapas that we’re going to recommend in this article. But you know, you NEED strength for all the tourist stuff and with this sandwich, you’ll surely get it! Go to La Campana (calle de Botoneras, 6). You’ll not regret!! 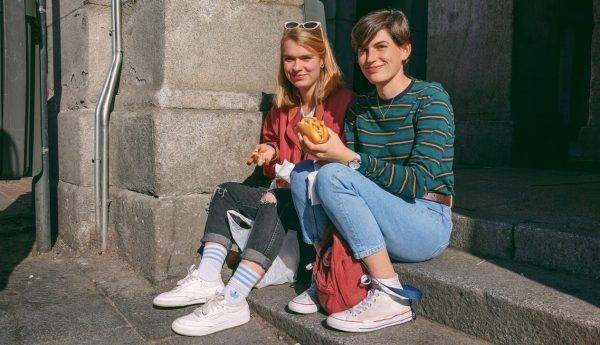 2. WHERE TO EAT THE BEST “CHITTERLINGS” IN MADRID

It’s one of the most traditional dishes, and its consumption is almost exclusive to Madrid. The gallinejas are guts of suckling lamb. The entresijo is the mesentery of the lamb and, therefore, a part of the gallineja. All this probably doesn´t sound very appetizing but be open to trying it! It’s served all deep-fried and accompanied by French fries. It was always a popular dish in the humblest neighborhoods, since it was considered “leftovers”, and therefore was cheap food. But nowadays it’s eaten for pleasure!

The most famous place to eat them is in the Freiduría Gallineja (calle de Embajadores, 84). This is very close to the old Slaughterhouse, which, by the way, is now a cultural center. This food is typical for popular street parties, so if you’re in Madrid during the May festivities, you’ll find it in street stalls sold in a paper cone. 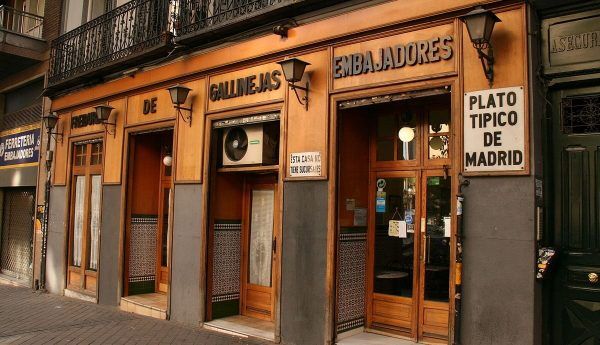 3. THE BEST GRILLED EAR IN MADRID

In the Spanish gastronomy, all the parts of the pig are used, and the ears are one of the typical plates of Madrid. One of the most recognized bars to try this particular tapa is La Oreja de Jaime (calle de la Cruz, 15) In Spanish, this means Jaime’s ear, so you’re already guessing what their star dish is, right?

The ear is served well fried, chopped into small cubes and accompanied by a spicy sauce. If it’s packed, try Casa Toni, just next door. As you can see, it’s not difficult to find this tapa in the center of Madrid. We hope you eat it with a very cold beer! 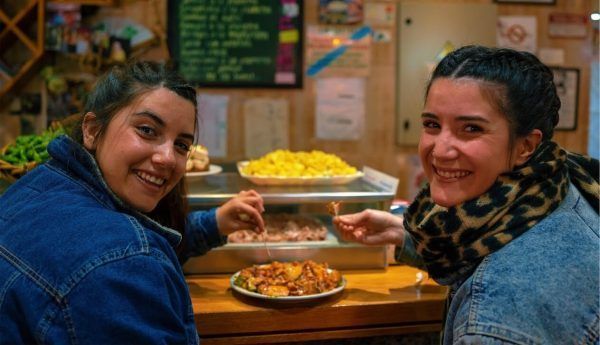 Who doesn’t know about the Spanish omelet? It’s a very easy dish to make and to eat! It also is one that generates group discussions like “With onion or without onion?”. Different types for different folks, but if you want to eat an omelet really “done to perfection”, go and taste a juicy tortilla from La Ardosa (calle de Colón, 13). It hasn´t been open since 1892 for nothing! You can accompany it with their vermouth on tap, another house specialty. But, if you’re a beer lover, you’ll find yourself in what was one of the first breweries in Madrid, which now offers imported beers.

5. WHERE TO EAT “TORREZNOS”

These fried pork rinds are finger-licking good, no matter how unattractive the name sounds. Some people say they’re going to “try one” and then leave the plate empty. In some places, they serve torreznos as an appetizer (especially in those noisy pubs where napkins are thrown to the ground) but a good place to ask for a ration is in Los Torreznos Bar (calle Goya, 88). Sometimes you have to go to those good old restaurants even if they’re not right in the city center! 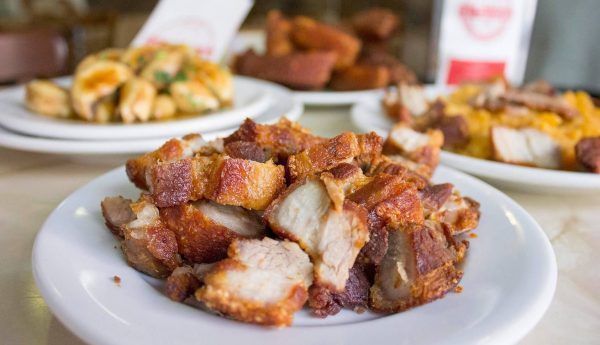 Or Castilian soup, as more refined people will say. It’s a simple and tasty dish that historically has fed rich and poor since it only takes basic and affordable ingredients. But the trick for its success is in its preparation.

A place where they make it very well is Casa Paco (Plaza de Puerta Cerrada, 11) a tavern from 1933. Do not forget to ask for bread so you can dip the bread many times in the broth. It will look like it just came out of the dishwasher… It’s said that this soup feels great when you’re hungover. So, now you know what to have for lunch after a great Madrilenian party! Also, you can find here some cool restaurants in Madrid. 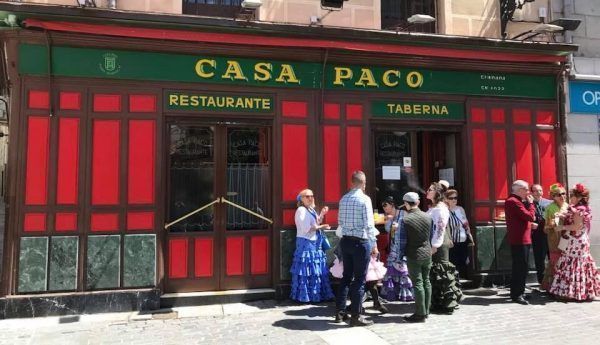 As good croquette lovers, we like to eat all the flavors and sizes, but there is one in particular that has become a classic of Madrid: the cod croquette of Casa Labra (calle Tetuán, 12). It’s a centenary tavern with vintage decoration, full of history and… full of people. But the service is super quick, don’t worry! You don’t even need a table, people eat them standing inside or outside. Croquetas are ordered by units and they’re a good size (but you surely will ask for more than one…) Of course, do not make the beginner’s mistake of burning your tongue! Don’t be anxious and enjoy every bite! 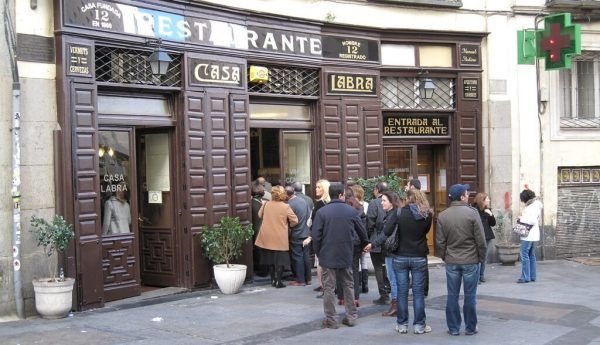 Spain, together with France and Italy, is one of the main consumers of snails. What’s special about Madrilenian snails? Well, they’re cooked with various spices and chorizo! The best-known place in the city to eat them is Los Caracoles (calle de Toledo, 106). People usually eat them standing at the bar and drinking a beer. They’re very good, and you can’t miss them! They’re typically served in a clay pot. If you go as a group or go alone but you REALLY love snails, we dare you to ask for their “marmite”. 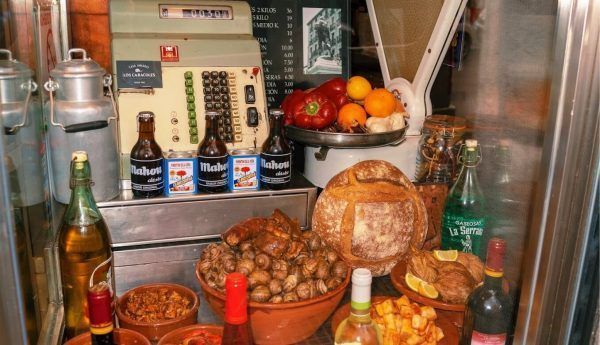 Fancy eating tender shrimp bubbling in olive oil with tons of garlic??? Yeees you do. And the best place to do it, according to thousands of Google reviews, is La Casa del Abuelo (calle de la Victoria, 12). There are other branches, but this is the original tasca of 1906. There are a lot of tapas, but we recommend you go for garlic shrimp and accompany it with their sweet Spanish wine. The most popular garlic flavors are Pil pil, scallions, and saffron. (Our mouth is watering already, and yours?) But they make quite a statement on their façade: the house specialty is grilled shrimp. Your choice! Bear in mind, it might not be the cheapest backpackers’ starter, but the taste is delicious. It’s an extremely popular bar, some may say it’s too touristy in terms of crowds and prices, but you’ll have to assess it for yourself! 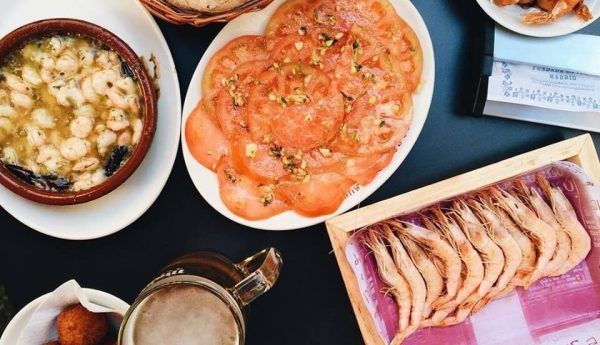 Finding out where the best tapa of patatas bravas of Madrid is served is a difficult task, as like the potato omelet, there are too many types and places that serve it! One would think that spicy means really strong flavor in your mouth, but it really depends on your spice tolerance (and in many countries “spicy” is much hotter than in Spain). This typical tapa is also vegetarian, if you are looking for the best vegetarian restaurants in Madrid, read this post.

We love the secret sauce of Docamar (calle Alcalá, 337) and the singular but not-so-spicy sauce of Las Bravas (calle Álvarez Gato, 3). Additionally, in several of the restaurants mentioned above, you can also ask for patatas bravas, sooo, you’re not leaving Madrid without eating a good portion! 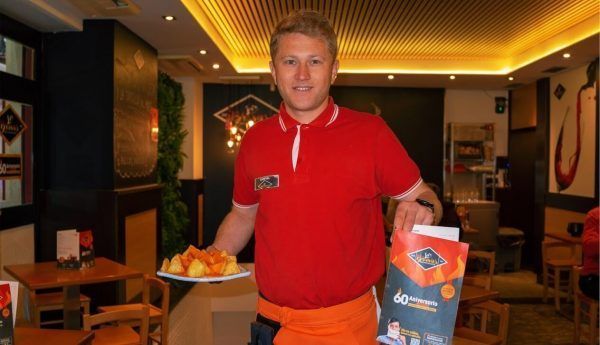 By popular request, we have to expand this article about the 10 best tapas in Madrid with more dishes because you ask us moooore and mooore, you are insatiable! And 10 tapas fall short.

So here are another couple of “extra” dishes that you should not miss during a visit to the capital.

And let’s talk about a quintessential part of Spanish cuisine: jamón ibérico. Along with Spanish wines, both are delicious. Irresistible, and famous all around the world. Unforgivable to not to try this tapa during your trip to Madrid. If you want a good Iberian ham sandwich to go, buy at Enrique Tomás (Calle Carretas, 21). There will be other cheap bites around city, and you’ll see other tapas bars with posters outside announcing more competitive prices but, don’t let them take you for a ride and avoid tourist traps! Jamón serrano is not the same as Jamón ibérico! Both are obtained from the hind legs of the pig, but the Iberian comes from the Iberian pigs (those from Spain and Portugal), and they taste like no other. So worth the price. You try and tell us later! 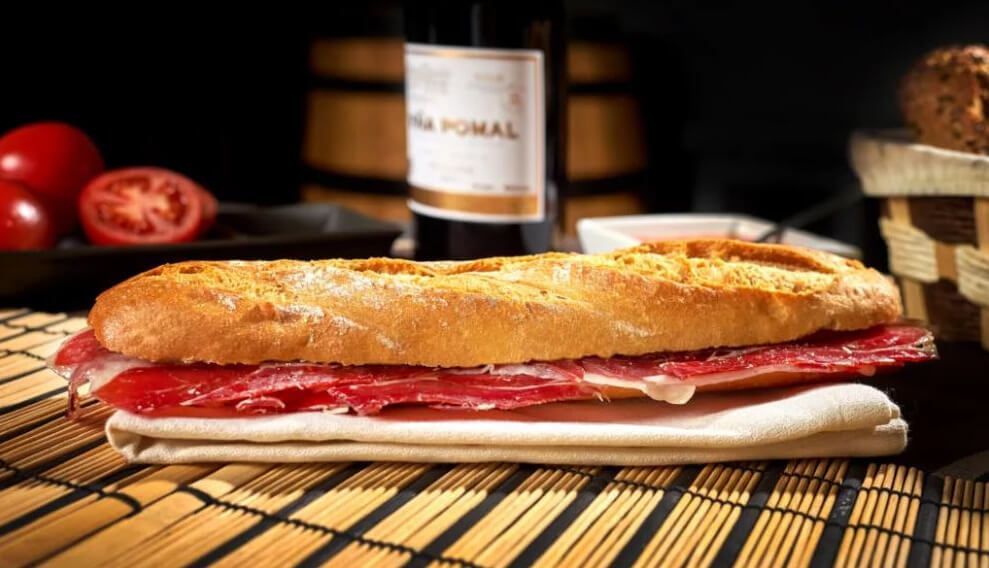 Manchego cheese is made in La Mancha – a region in Spain famous by El Quixote. It’s made from unpasteurized sheep’s milk. Its flavor sharpens with age, and so it does the texture.

Pretty much all good tapas bars have it in their menu but if you happen to be at Mercado de San Miguel (where you can find many of the best tapas in Madrid ), make yourself a favor and stop at the counter of Mya Quesos Artesanos. You’ll not only have the chance to buy some goodies to bring back home, but also to try some of the best Spanish and international cheeses. Red wine or champagne glass, what are you marinating it with? 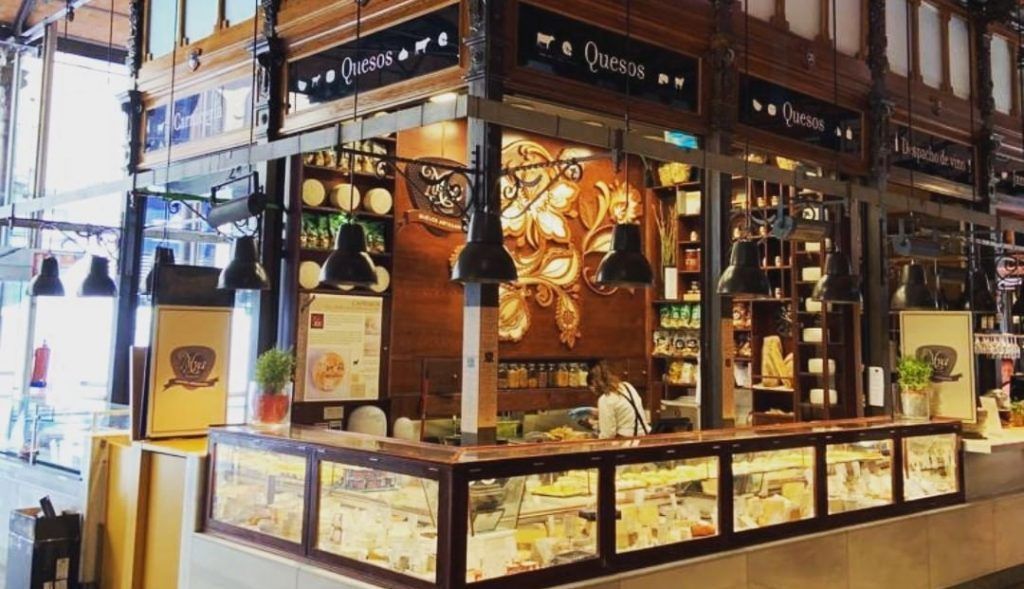 It’s a very common aperitivo in Madrid and a tapas classic in Spain! Midday. Have a beer or tap vermouth, and a plate of boquerones en vinagre. It’s of the most consumed fish in our country, as well as anchovies. But what’s the difference between boquerones and anchovies you say? Well, it’s actually, the same fish, but it’s elaborated differently. Salted are called anchovies, and marinated are called boquerones.

They are usually served alone, but it’s also very popular on a layer of potato chips. We love going to El Boquerón (Calle Valencia, 14), very close to Cats! Boqueron indeed is the star plate of the house. But the fresh seafood is also highly recommended for its great price. 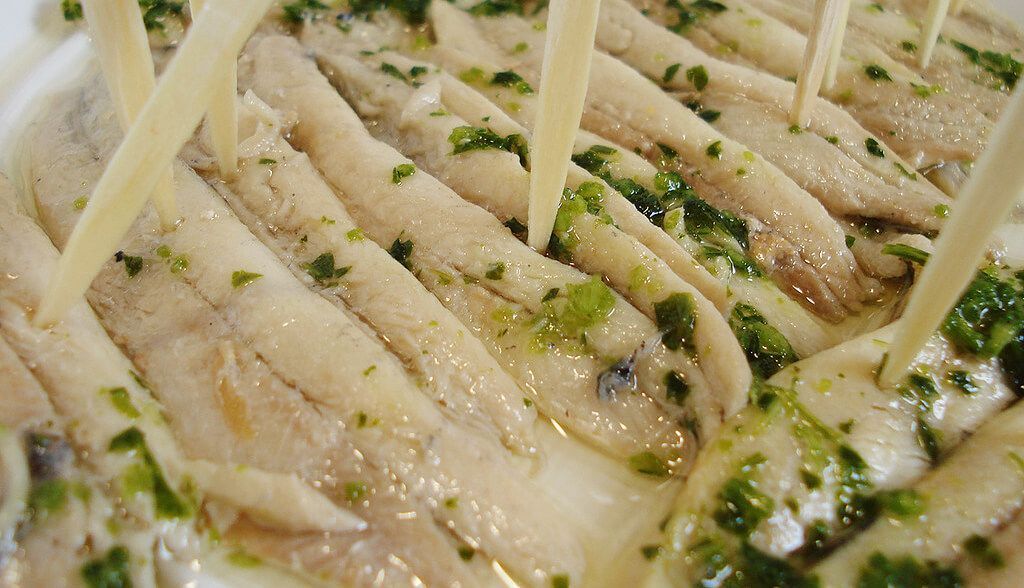 The best place to stay is Cats Hostels ™: The best Hostel in Madrid