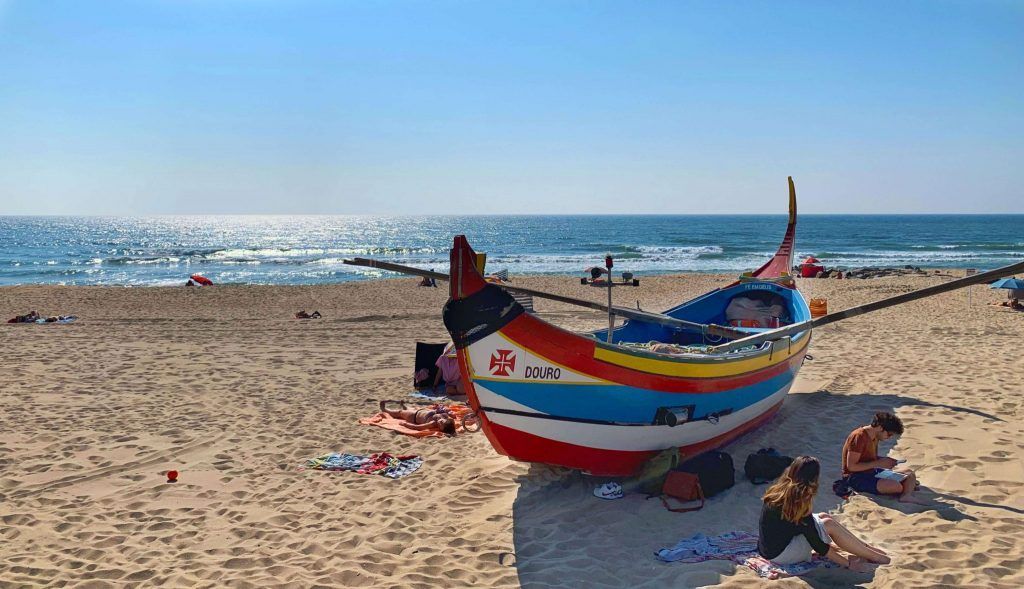 Boys and girls, it’s that time of year again. SUMMER IS F*****G HERE GUYS, which means – of course-, the arrival of your well-deserved vacation days!

Whilst some people have racked their brains to decide between spending their time off getting lost in a new amazing city or hitting the coast to relax on the beach for a few weeks… You smart, gorgeous, in the know travelers heading to Porto, don’t have to sacrifice either! Porto has it all, here’s what to visit in Porto aside from its beautiful beaches!

Yeah, yeah, we know. Porto may not seem like the ideal beach destination at first, which is such a shame because that assumption is utterly W-R-O-N-G. Don’t think so? There’s a good ol’ saying which states “seeing is believing”… So come see for yourselves the most spectacular Porto beaches!!!! 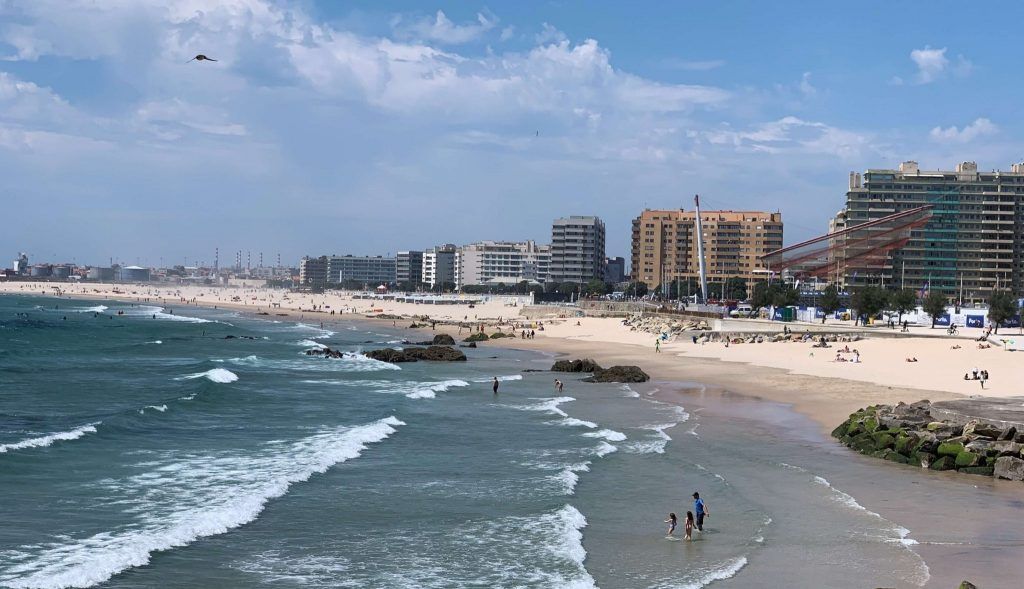 Destinations like Porto, with the most amazing beaches on one hand and a buzzing city life on the other, which combine peace and tranquillity mixed with a little fun, excitement, and mayhem – are few and far between. The possibilities are absolutely endless!

And if all this weren’t enough, here’s another pointer for y’all: Porto is actually an astonishingly great starter point from where you can carry on your travels to other regions along the Iberian Atlantic coast. Some of the best-ranked beaches on the planet are not that far away, whether you’re headed south down the Portuguese coast or slightly north to Spain’s Galicia area.

But really, we can’t think of a better way to end a loooong day of lounging at the seaside than taking in the breathtaking views of the River Douro.

Let’s get down to business. Here are the facts. Mainland Portugal’s beautiful coastline runs along 585 miles from top to bottom, and that’s not even taking into account the endless beaches on our country’s blissful islands: Azores and Madeira.

Our country is actually proud to have one of the highest ever number of beaches with the Blue Flag honor worldwide (an internationally recognized seal of excellence in quality and safety). This summer, a whopping 350 Portuguese beaches will have this certification – that’s a lot!!

Out of these 350 top-notch beaches, 75 of them are in the northern region of the country, where the city of Porto is considered as a second capital. We’re lucky enough to be slap bang in the middle of all the good stuff! We have a strategic geographical advantage, what can we say?

Another big thing we have up our sleeve is the oh-so-pleasant and delicious Porto climate we can offer y’all for this specific time of year! Again, thanks to our specific geographical location, you guys can enjoy some really nice warm weather during the day (not too hot, which is appreciated), and lower temperatures at night, which will help you sleep like a baby and not worry about sweating like a pig. 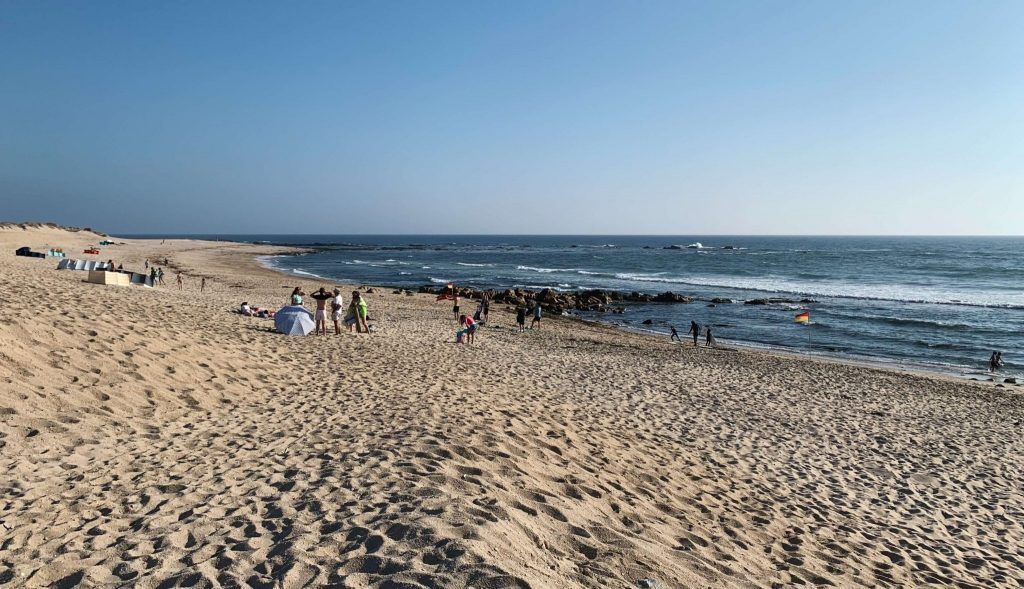 Right, time to get those bikini bodies at the ready! Porto beaches’s top-ranked!

Seeing as us guys at Cats are just so darn nice, we want to make sure you are absolutely up to date with which beaches are a must in our neck of the woods. You can thank us later when you check in for your awesome stay at Cats Porto!

If you’re looking for the closest possible beach to have a mooch around and to escape the city crowds – look no further. Foz do Douro is tucked away in the western corner of Porto, and is accessible via public transport in record timing (less than half an hour!). Just take the 500 bus from Praça da Liberdade (Liberty Square) and off you go!

In precisely 28 minutes, you can get from Cats Porto’s entrance hall to the sandy beach Foz do Douro seaside! Porto’s seafront promenade is always a fab option when visiting this area, and also, if you’re one for evening cocktails (who isn’t?) Foz do Douro’s nightlife scene is pretty epic! with many restaurants and bars. Avenida Brasil is where it’s at guys. 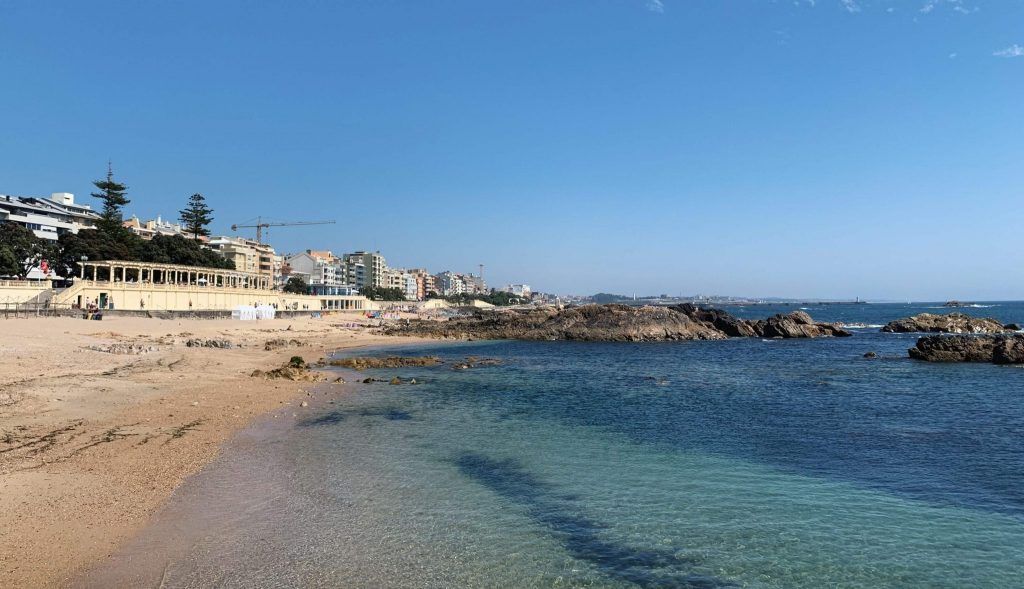 This northern Porto suburb is a well-known fishing town, which is home to some beaches that every active, sporty, adrenaline junkie traveler will fall head over heels in love with, one of the most popular beach in Porto. Why, you ask? Because it’s awesomely windy in this area of Porto’s shoreline, meaning it’s time to get the surf and windsurf gear out and make some exhilarating memories!!

Also, if you guys enjoy fish and seafood dishes, the Porto beaches in Matosinhos have some top restaurants, which receive fresh catch of the day all year round! YUM!

You can be here in no time – take Porto’s metro line A at ‘Trinidade’ and hop off at ‘Matosinhos Sul’ – and Bob’s your uncle.

For the most bold and audacious of travelers, here’s a head’s up: Matosinhos has a nudist beach – la Praia do Aterro!! So, if you like to let it all hang loose and let it flow, you can feel right at home! Goodbye bathing suits!

Leça da Palmeira is a small town that belongs to the region of Matosinhos, although it has its very own white-sand beaches, which hide a few little surprises. Yes, friends, we are talking about its charming natural saltwater tidal pools, known as Piscinas das Marés.

These tidal pools are becoming increasingly popular among tourists searching for something unique. They’re now even considered a ‘National Monument’ and we have to admit, they live up to their expectations – they’re kinda cool!!

A little bird has told us that, unfortunately, these tidal pools are currently closed for rehabilitation works, and are expected to be opened to the public in summer 2020. Keep this in mind for next year! A cheap and cheerful plan (as always in Porto) indeed.

To get to this lovely spot from the city center, hop on the 507 bus, which leaves from ‘Cordoaria’ station – a 10-minute walk from your favorite hostel in Porto (Cats, obviously). It takes about an hour to arrive. It couldn’t be easier!

The beaches of Póvoa de Varzim are the natural treasures of the north of Portugal, located near Braga. This shoreline is known for its beautiful landscapes and its breathtaking views. It is never NOT a good idea to venture into nature for a while to recharge your batteries and take a time out. The area stretches along 7.5 miles of coastline, which is divided into a couple of wonderful bays. It’s so captivating!!

From Porto, you can take the metro line B to get here in under an hour. The busiest beaches are the ones that are nearest to the town center. These would be the Praia da Salgueria or the Praia Redonda, for example. If you wanna get away from the hustle and bustle for a bit, head to the Praia de Santo André. It’s well worth it!

Instagrammers, assemble!! Now this, you are gonna love. The Praia do Senhor da Pedra beach is one of the most unique and extraordinary sights your lil’ eyes will see on your Porto travels.

This beautiful beach is also one of the most photographed areas of northern Portugal without a shadow of a doubt. And when you get there, you’ll get it – trust us.

Just off the shores of Miramar, a tiny town belonging to Vila Nova de Gaia (neighboring city of Oporto), is the Capela do Senhor da Pedra (Senhor da Pedra Chapel), which was built atop some rocks at the end of this very beach in 1686. At high tide, the waves surround this little chapel entirely, leaving it engulfed by the sea. This exquisitely natural occurrence creates the most picturesque views, which have been captured on Portugal postcards for decades. Get the cameras out!

It’s a stone’s throw away from Porto. It only takes 25 minutes on the Aveiro Line commuter train (CP Urbanos do Porto) from ‘Campanhã’ to ‘Miramar’. This is one of the things you simply cannot afford to miss out on when you visit!

Last, but not least, we have the Praia de Espinho. This cute little town is located just inside Aveiro’s borders, which itself is close to our wonderful city. You’ll love its tiny and windy colorful streets (so will your camera and your Instagram followers, we’re sure).

The area boasts 10.5 miles of incredible beaches, it is situated in the south of Porto, which begins just south of the Douro River’s estuary. The Espinho beach is known for its soft white sand, which makes it a top choice for tourists and locals alike.

This coastline’s heavenly scenery is the perfect backdrop for an afternoon of relaxation, sunbathing, enjoying the Atlantic sea breeze and feeling how all our worries of life fade away for a little while.

To get here on public transport, we’re gonna do the same route as for Praia do Senhor da Pedra, jump on the Aveiro Line commuter train (CP Urbanos do Porto) from ‘Campanhã’.

Just for you, here’s a snippet of information on an astonishingly beautiful location that won’t go amiss. The best beaches in the entire world, according to The Guardian, are just off the coast of Spain’s north-western region of Galicia. Which just so happens to be two hours away from Porto. What d’ya make of that?

This is the hidden treasure of the Atlantic, for sure, and also a leading example in terms of the environmental protection and preservation of natural park areas. The Cíes Islands remain to this day in pristine condition, thanks to huge efforts to preserve the area’s natural essence. White sands, crystal-clear waters and pure nature await.

To get there, head to the Spanish city of Vigo (90 miles north of Porto), and from there take a ferry that will transport you to the magical islands. Our advice: plan this trip in advance at all costs because ferry tickets are hard to come by in high season – the islands’ authorities control the daily visitor capacity, and this location is so SPECTACULAR that everyone wants to bask in its glory. 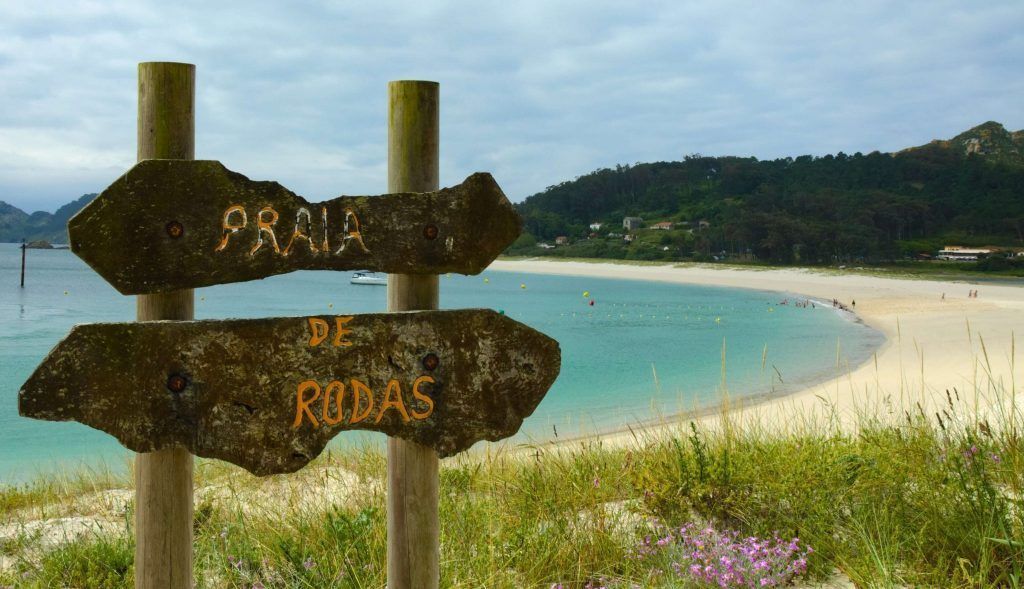 So, it is safe to say the CAT is out of the bag… (Get it?) The best beaches in the region are no longer our little secret. You guys are all experts now on the top beachy spots to visit, and we know this information is worth its weight in GOLD for the avid beachgoers, who may have been mermaids in another life. Hopefully, you can see Porto in a new light now – coastline included.

But, let’s not forget that the true beauty and magic of Porto lies in the city streets as well as on its delicious beaches. And who better to assist you in squeezing all the goodness out of such a promising destination than your friends at Cats?

We sure know our stuff (and there’s more where that came from). Let us help you create the most ideal and fabulous vacation plan to suit you, so that your time in Porto becomes the sweetest memory ever. Nothing would make us happier.

So, friends, the time has come to start filling those suitcases with anticipation, excitement, a touch of happiness, some comfy shoes, a map (we love maps), and don’t forget sunblock and swimsuits! Unless you are headed to Praia do Aterro in the nude, that is!!!

Let’s go to the BEACH. 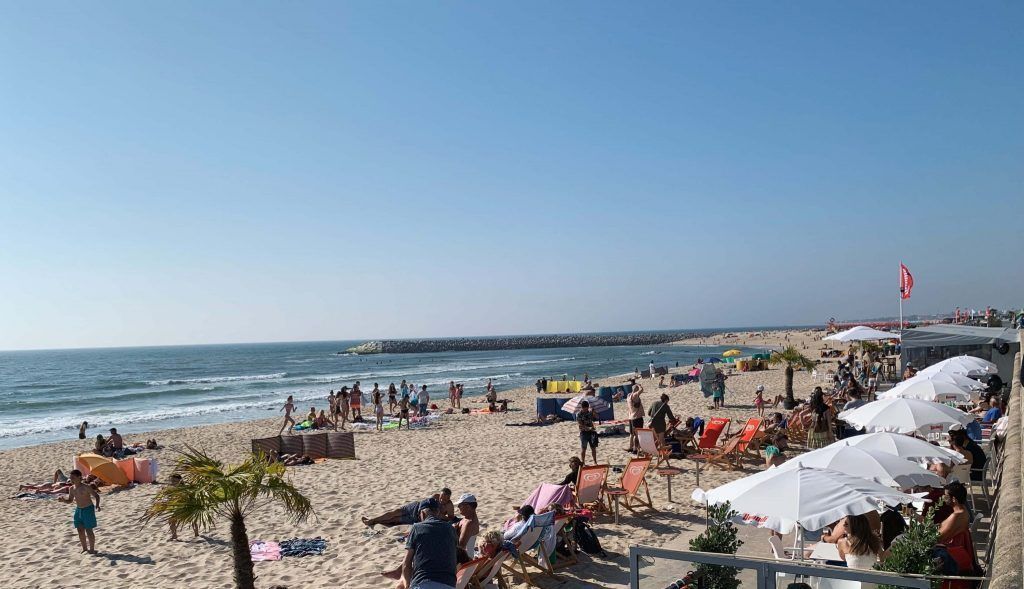