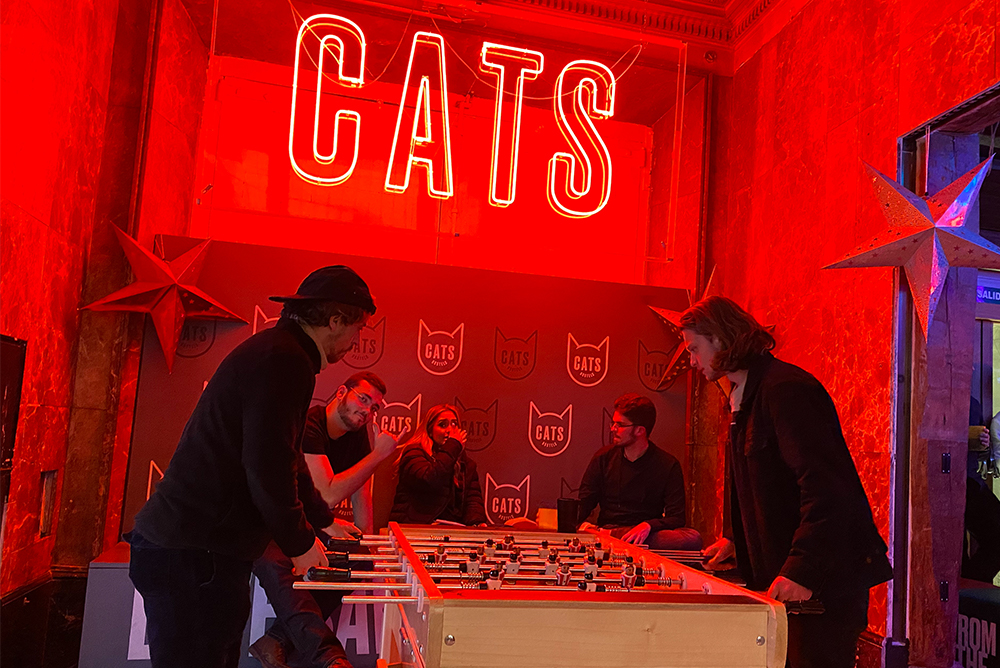 Welcome to the CATStar World Cup 2022

You may be from Torre Pacheco, Huesca or Torrejón.

You may be a staunch fan of indoor dominoes on Sundays in the village.

You may hate The Simpsons or see Homer with autobiographical overtones.

You may be a supinator at heart but a pronator by family heritage.

But when the World Cup comes around, it’s a world cup! Who doesn’t support their country? You paint your face and learn the match schedule by heart even if you realise that you don’t even know half the players. Who cares?

The football festival is here and even if the tempos have changed a bit, it’s OK, don’t panic. At CATS we adapt ourselves and instead of offering you the best atmosphere for the matches in summer, we offer it to you in autumn, which is why we have seven lives, or more.

Do all three language levels of DuoLingo

Or enjoy a World Cup.

All those things you can do in 4 years. Now you’re bummed to discover all the things you could have done, aren’t you? After the World Cup you get on and do it. We trust you.

We went out with a classic 4-4-2 but with a desire that you can only know if you’ve been here before. The best hostel in Madrid, modesty aside, is waiting for you to give you the best atmosphere, company and drinks.

Our staff is looking forward to seeing you all and cheering in front of the screens we have prepared. Spain wins a match and you want to celebrate it properly? Stay with us until the end of the party and relax in the best atmosphere, where games, beautiful people and lots of surprises await you.

WHY ARE WE WATCHING A WORLD CUP IN WINTER?

Dear fellow footballer and cat person, we have all asked that question. But it turns out that it is very interesting and creates a precedent that leaves the door open for future decisions.

Between May and July, every four years, we have seen the World Cup since 1930. These dates were chosen to coincide with the end of the main leagues so that all the big players would be available to play with their batteries recharged.  At the end of the World Cup, they still have a few days off before starting the new season with their clubs.

But this year is an absolute exception and the main reason is the heat. Qatar has an average summer temperature of 42 degrees Celsius, with 50 degrees Celsius being recorded more often than humanly bearable.

Now imagine yourself on a sun lounger, sipping a cool cocktail by the pool with forty-something degrees in the sun. How about that? I’m telling you, it’s unbearable. Your body desperately asks for shade.

In the same temperature but running non-stop, how long do you think the players would stand up? Hence the decision to hold the World Cup in the cooler months. Well, less hot.

WHAT IS NEW AT THIS WORLD CUP?

We know why, for the first time in history, we’re going to love wearing a scarf during a World Cup. But how did it come to this?

You can imagine that the decision to host the first ever World Cup in the Middle East and in winter, in the northern hemisphere, was not exactly welcomed with open arms. The world’s major leagues didn’t understand that the season would be cut in half to have… a World Cup!

The players would go to the World Cup tired and would arrive even more tired to continue a season that promised to be tough. But FIFA thought about integration; “The Arab world deserves a World Cup. There are 22 countries and they have never had the opportunity to host the tournament before”.

We are going to find positive things. The matches will be played in 8 stadiums that are equipped with air conditioning and cooling systems that will make the matches more enjoyable for everyone present.

As all the stadiums are within 50 kilometres of Doha, where the host hotels are located, the teams will not have to move from one venue to another at each stage and will not have to travel far. It will also be the shortest tournament in history, taking place over 28 days.

Last but not least, it will be the last World Cup with 32 teams. The next one will have 48 teams and is expected to be longer, and in the summer, of course. You can see that not everything is negative.

Let’s put a bit of order. These are the dates you have to book and mark in red on the calendar. Think of an excuse not to go to work.

It all starts on 20 November. On that day, as has become customary, the hosts will play the opening match with a pre-opening ceremony that is sure to live up to expectations. So at 11:00 we will be treated to a Qatar-Ecuador match. Which may not bring you much footballing joy at first, but in a World Cup everything is exciting. Everything.

– Transport: Madrid is a city with excellent transport links. Get around like a real Madrileño with our metro and buses. With us you have everything at hand, ask at reception but if you move more than a wet cat, here we leave you the transport info of the capital.

– Security: If you choose to go to big meetings, you know that where there are a lot of people, a lot of things can happen. The possibility is minimal, but if it happens try not to get stuck and be the one who asks; What is the 061 number? You have nothing to fear and if there is something that scares you, 112 is your number.

– Weather: It’s practically winter, it might be… but God’s sake, this is Spain! Can it rain? Of course, we also like to drink water, take showers and that kind of things. But you can have a sunny day of 20 degrees, no problem at all.

– Eating and drinking: You are in the perfect place to enjoy the best gastronomy. Take a look at our recommendations for eating like a real marquis. Don’t think we’ve forgotten about you because you’re vegan. In the capital there is something for everyone.

– Party: Madrid is world famous for its nightlife. You can find live music, well-known discotheques, gay bars… You can’t go wrong.  If you get lost and need to be taken by the hand and guided through Madrid’s nightlife, don’t worry, the win-win for our visitors is a pub crawl like Cats, we are guides specialised in Madrid’s nightlife!

– Accommodation: Really? but how can you ask me that? Well, at CATS! We are the best and with the best atmosphere. Come and discover that we are not lying.