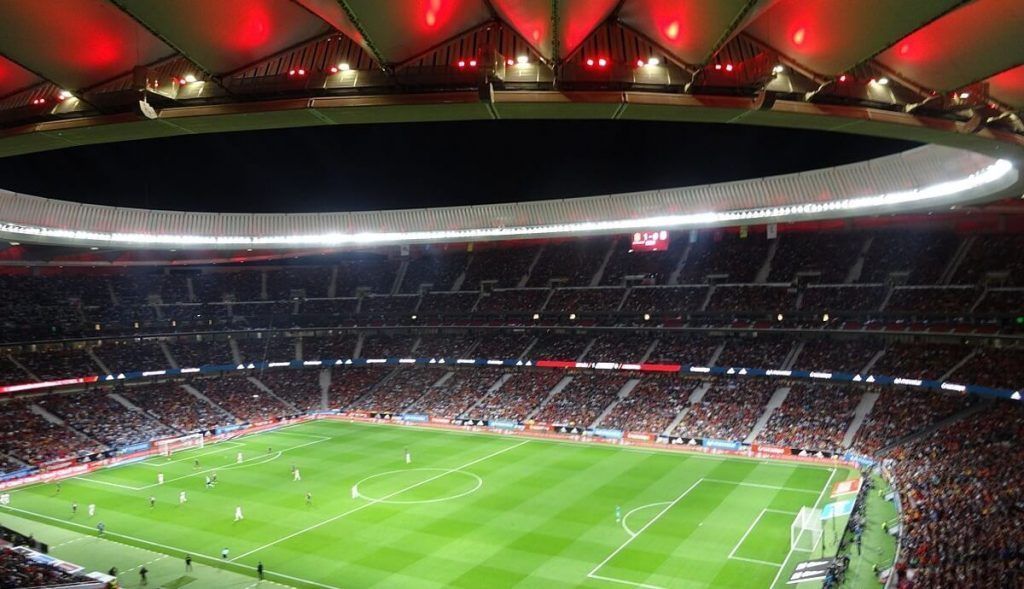 FI-NA-LLY. It’s time to get the (foot)ball rolling for La Liga to commence!! After what has seemed like FOREVER (three months), football lovers everywhere can rejoice, as the new season of Spain’s La Liga is coming in hot. Could life be any sweeter?

This is for sure a moment to celebrate. The weekend of August 16th marked the kickoff of the season with the first match of 380 to come (that’s over 34,200 minutes) in Spain’s most prestigious football tournament, and one of the most well-loved professional sports leagues around the globe. The excitement begins as contenders battle it out for 10 long months to see who comes out on top and wins the almighty title of La Liga CHAMPIONS!

THE HOLINESS OF FOOTBALL: WHICH ARE MADRID FOOTBALL TEAMS?

It’s a well-known fact that Spain absolutely worships football. Fans eagerly await the weekend, when they take to the streets to cheer on their prized teams, through all victories and defeats. Bars fill to the brim with friends and families enjoying intense matches, united by their love for the same team colors.

And of course, dear travelers, Madrid is the best place to experience Spain’s football obsession! We know our stuff and are proud of it! The Community of Madrid – together with the Basque Country up north- has the highest number of clubs in the top division, with a total of four (Real Madrid, Atlético, Getafe and Leganés). Two of them are strong candidates for this year’s title. Ohhhhh yeaaah!

This means that 76 La Liga games will happen right here in Madrid this year! It’s where the magic is at! And man, if we count all the matches from other big tournaments that will grace our capital city in the coming months (UEFA Champions League and Europa League), we’re talking A LOT OF SOCCER! Madrid is, once again, the capital city of football. 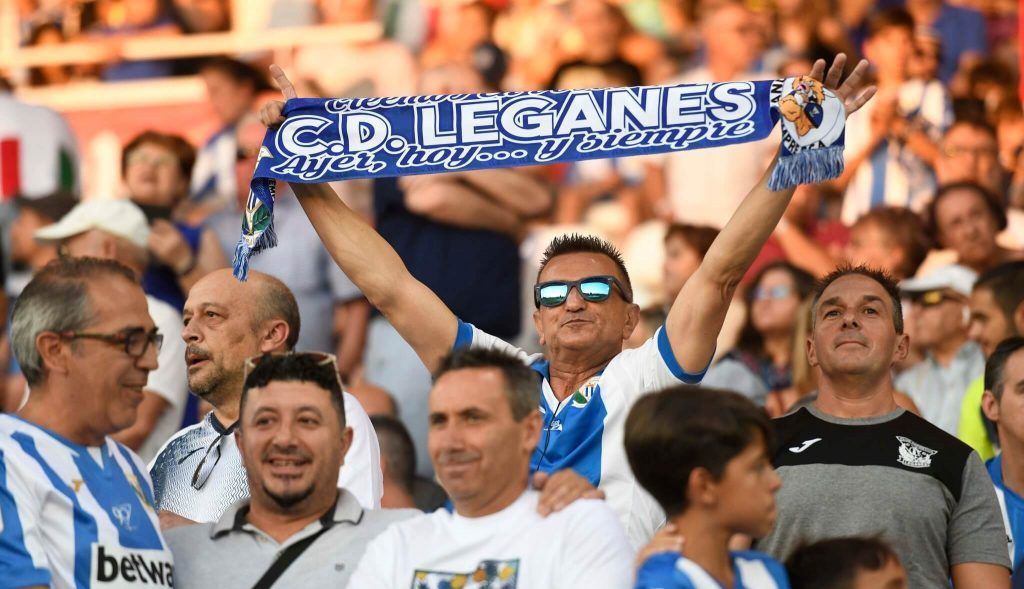 Time to get down to business. The numbers (dolla dolla bills y’all) speak for themselves. Since 2015, Spain’s La Liga has attracted a countless number of visitors in Europe and has moved more than 4.6 BILLION euros per YEAR in terms of tourism. In other words, to put it clearly: 2% of the money generated in the whole of Spain comes from this very tournament. This is a BIG DEAL.

Grab a pen and paper, we’re about to give you some key footie information about Madrid football teams so that you guys can weigh up each and every one of the wonderful possibilities that La Liga has to offer in Madrid. The best way to do this, of course, is to go to one of our city’s world-famous stadiums! Go on, treat yourself! 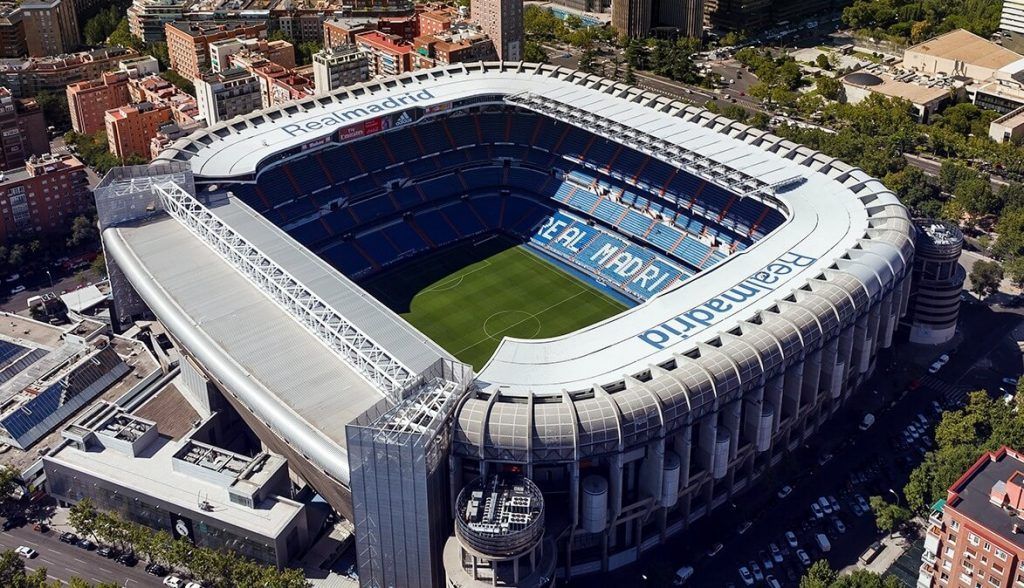 No need for any introductions here. Real Madrid is one of the most recognized and adored sports brands in the world, and the most valuable and successful club on the planet in 2019, according to Forbes magazine. Understandably, the level of adoration for this team in Madrid is palpable. So much so, that the Santiago Bernabéu Museum is the fourth most important tourist attraction in the city, receiving over 1.2 million visitors. That’s right, the most profitable museum in Spain is all about Real Madrid. How crazy is that?

A visit to the club’s museum is indeed recommended, but the real joy is to be found out in the actual stadium itself in the midst of an enticing football match! Experiencing what is known locally as an “épica del Bernabéu” – typically a Champions League night – is at the top of every fan’s list. There’s just magic in the ambiance as players and fans unite in the excitement of the game. They say that “90 minutes in the Bernabéu is a long time” – for the rivals that is!!

Quick tip: make sure you plan ahead with this one. It can get tricky to buy tickets closer to the match day so set your alarms and snag them quick! 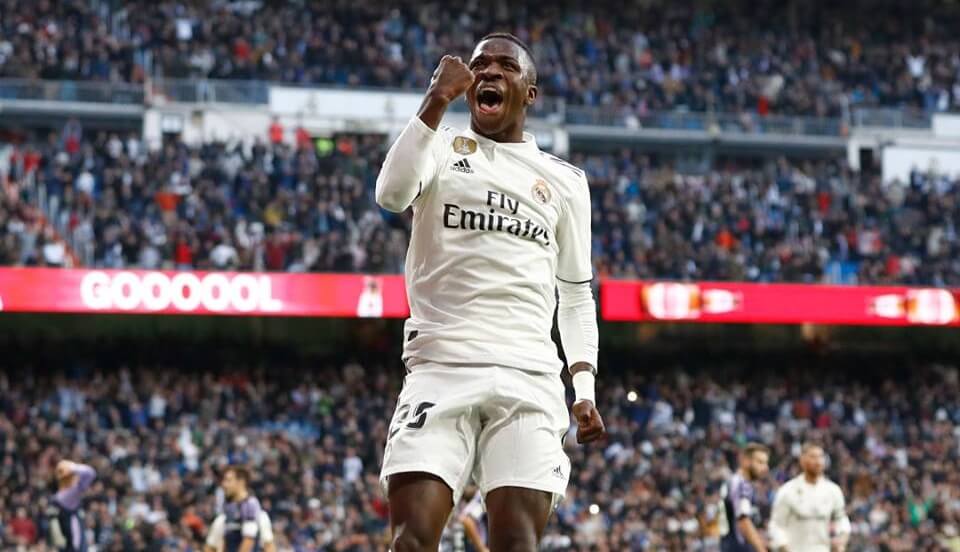 Next up is Atlético de Madrid, the city’s other big Madrid football teams. The Spanish capital is almost entirely divided between Real Madrid and Atlético fans. These clubs make amazing rivals.

“El Atleti” can be described as a symbol of true sentiment that goes beyond the purely sportive sense of the word. The club, known as “el glorioso” by its oldest fans, is now going through a crucial moment of renovation, of reinventing itself. Atlético is on an unstoppable mission towards joining the likes of Europe’s leading football teams.

The club’s new stadium, Wanda Metropolitano, is the best example of this wonderful transition. It hosted this year’s final of the UEFA Champions League and it was a MIGHTY match. The arena is an ultramodern, beautiful coliseum-like structure, equipped and designed with the latest technologies which together create a perfect and all-round football atmosphere.

A visit to these sacred grounds is more than necessary! Not only for the beauty of the stadium itself, but to watch in awe as the red and white striped club amaze the crowds in a sure-to-be spectacular show!

This year, the team has welcomed a lot of new key players, and its pre-season game has been unbeatable. When you visit Wanda Metropolitano, you’ll likely be seeing a future champion to many upcoming titles!! Aúpa Atleti! 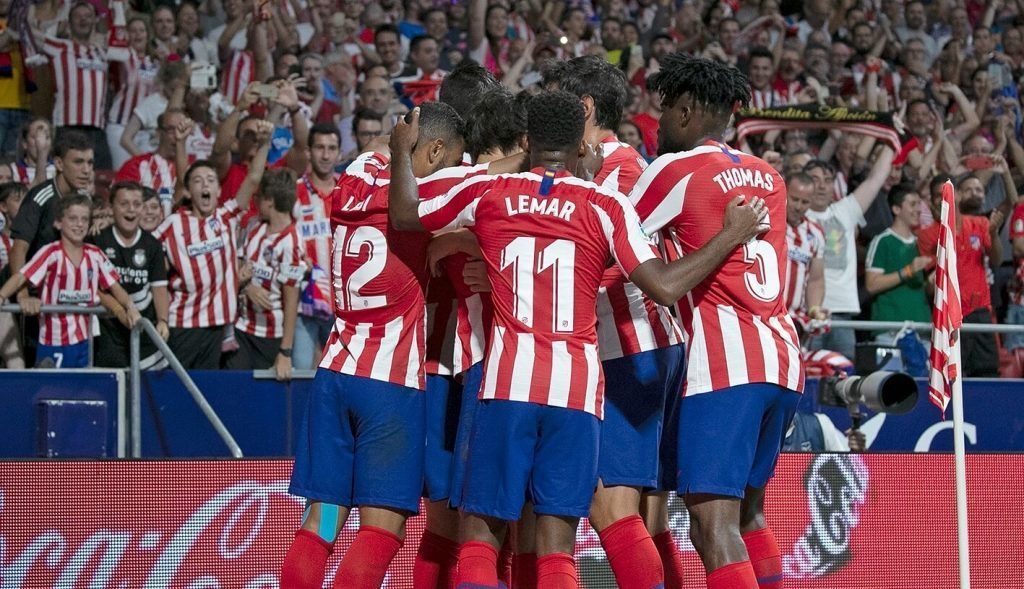 Let’s leave the billionaire football stars, flashy cars, and extravagance behind now. It’s time to get back to our roots, to the real world. Welcome to Rayo Vayecano – a local football club with a lot of charm. Not the typical tourist’s cuppa tea.

Vallecas is one of Madrid’s most humble neighborhoods, and nestled among its labyrinth of streets, shops and typical Spanish bars, the Vallecas stadium stands tall and proud. This arena differs from the rest, as a somewhat run-down concrete mass of barrio authenticity.

Every weekend, neighbors flock to the stadium to cheer on their local team, which has placed itself in the second division this year.

For a much more modest price, and with a more ‘hood-style feel to it, we recommend visiting the homely Vallecas stadium and singing along with the loyal Rayo fans. 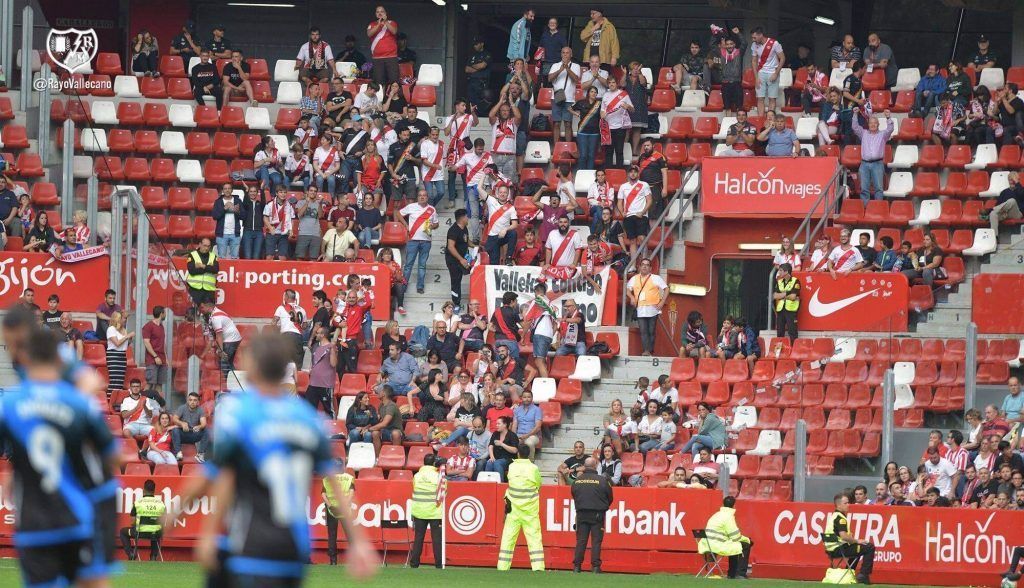 To the south of Madrid, less than an hour away from the city center, is the home of another competitor for this year’s La Liga title. Getafe football club will start this season with one its finest years in its history under its belt and will return to the Europa League after almost a decade after finishing fifth. They’re onto something!

Heading down to a Getafe match is certainly a golden opportunity to escape the bright lights and masses of tourists in the center and to see some of the top clubs in La Liga battle it out, or even to enjoy a night of good old European football. 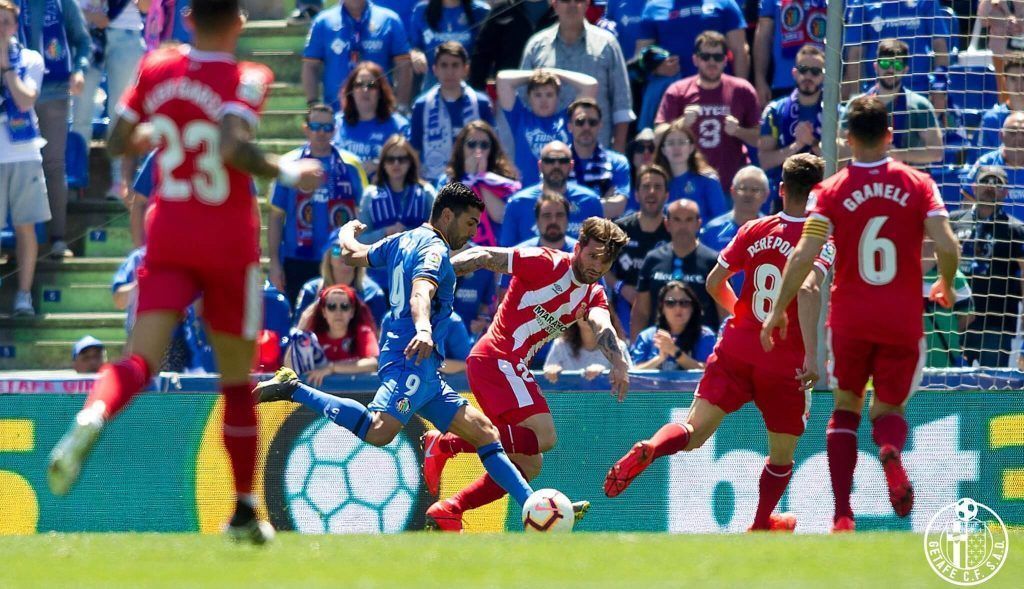 Leganés is the neighboring (and rival) team to the previously mentioned Getafe! This local club will face its third season with determination. The city of Leganés is on the outskirts of Madrid, also half an hour by train from the center. Its football team continues to amaze everyone with its efforts and motivation, throwing itself completely into the league with hard work and hopeful hearts. And they do all this with one of the tightest budgets in the entire tournament.

Just like with Getafe, if you’re up for something different, or can’t splash the cash, making your way to Leganés can be a perfect option to make sure you see the best Spanish teams in action. Stay tuned! 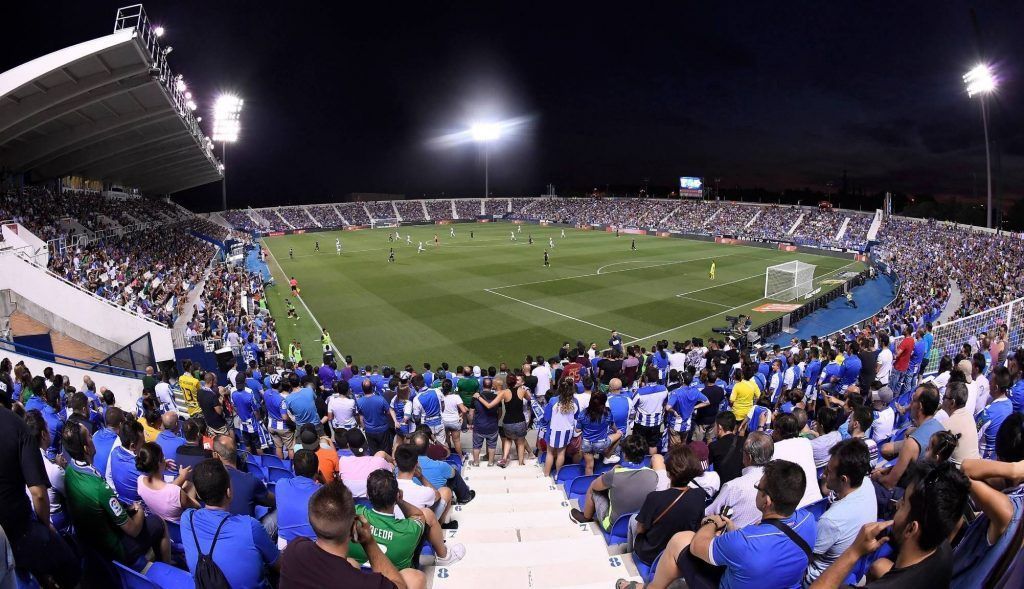 As you can see, Madrid eats, breathes and sleeps football. There’s no escaping it (not that anyone would ever want to!). The city’s colossal stadiums we’ve mentioned are sometimes not nearly big enough to hold all the footie fans and their relentless passion for the Beautiful Game. So, fret not friends, if you find yourself out of a ticket to a live match, DO NOT PANIC.

Every bar on every street in every neighborhood will be playing the main matches on their biggest screens. You can really experience the true Spanish football emotions in a bar surrounded by dozens of fans screaming and cheering at the screen! So grab your caña, tinto, or your bocadillo de calamares and head down to your favorite spot.

We’re one step ahead at Cats! On big football nights our bar is transformed into life-like football stands with a huge TV, flags all around, the most awesome staff ever and (duh) free-flowing booze for all! Now, this is how to enjoy a game Cats-style, because you see – just like Madrid – Cats is also the home of football, and you’re always welcome! 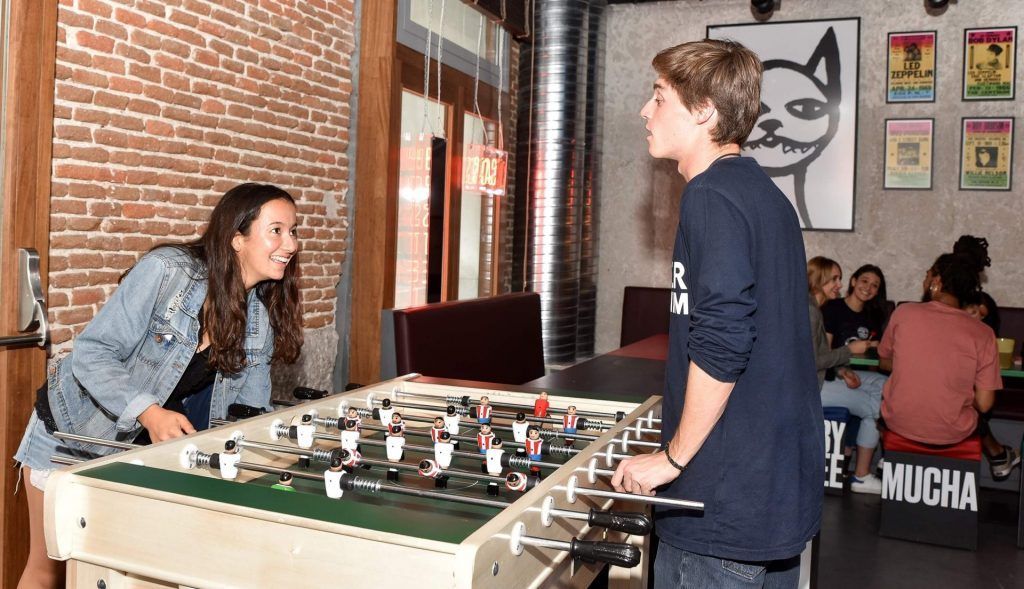