After the international success of the most famous Spanish crime drama series, we’re increasingly receiving at Cats Hostel Madrid more fans and fans asking us where Money Heist was filmed and the real scenarios where the red jumpsuits thieves with Dalí masks made their magic.

As most of La Casa de Papel (Money Heist) locations take place in Madrid, we had to dedicate this blogpost to our beloved city, but we’ll tell you as well about the other locations of the tv series!

[ATTENTION SPOILERS] Read this post only if you have already seen the all available seasons of La Casa de Papel.

The Royal Mint of Spain receives visitors daily, but the show fans are disappointed when they get there because this places isn’t a La Casa de Papel location! All the interior scenes were shot in some sets in Madrid surroundings (Colmenar Viejo). The reason why it was not filmed inside the building is quite logical: the place where banknotes are produced should continue to be a safe and private (and that doesn’t sound like Netflix!) At least, the exterior facade does exist, and we’ll tell you in a sec. Keep reading below.

-> If you’re keen about the money and history and evolution, you can visit their museum, that one is open to the public. 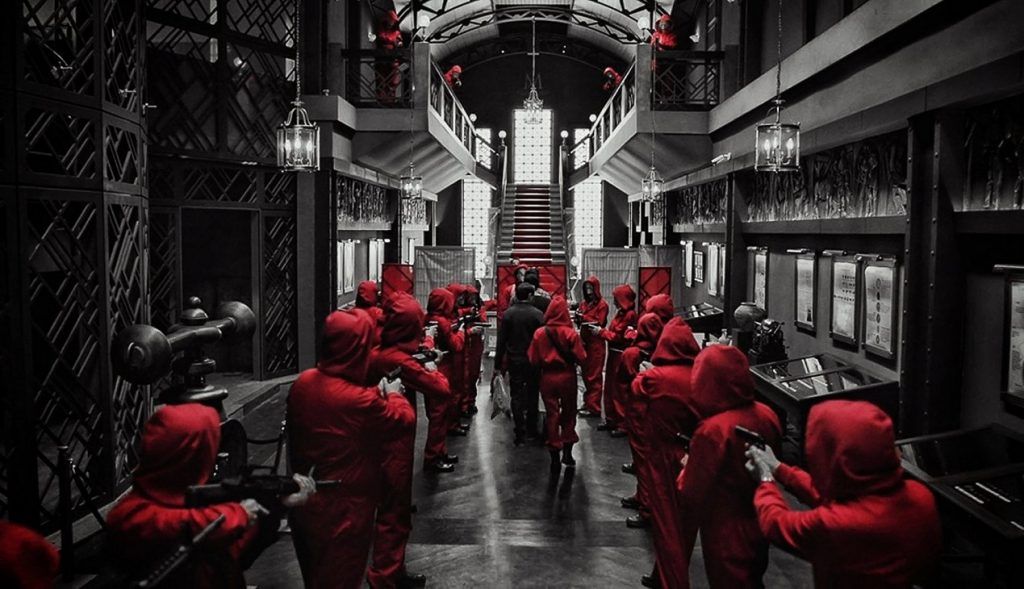 Now we are facing one of the most famous facades in the world, the headquarters of the Spanish National Research Council (CSIC). In the series, it simulates the Royal Mint because the original is placed in a rather narrow street and with not enough space for a shooting set of these dimensions. The chosen location is an enclosure closed to the public, which greatly facilitated the control of the shooting.

You cannot pay a visit inside, as it is not a tourist site but the state agency that develops and promotes research for the benefit of scientific and technological progress. But you can see the facade from further away.

The place where the money is printed in fiction, is actually used to print newspapers! So, the printing machinery is real equipment. We’re not sure a vigorous Alba Flores is under control thought. Sorry for you, you cannot visit the place unless you become yourself and client and come to print something (we have heard that banknotes are not a really good idea…)

The famous bank notes shower takes place in one of the most central squares of the capital, Plaza de Callao. This Money Heist location is an unmissable stop on a trip to Madrid, it’s like our mini Time Square. Here you’ll find the iconic Callao Cinemas, department stores, and giant screens – those that are hacked in the show to launch messages to the population.

???? Plaza de Callao in the center of Madrid. Metro Callao. 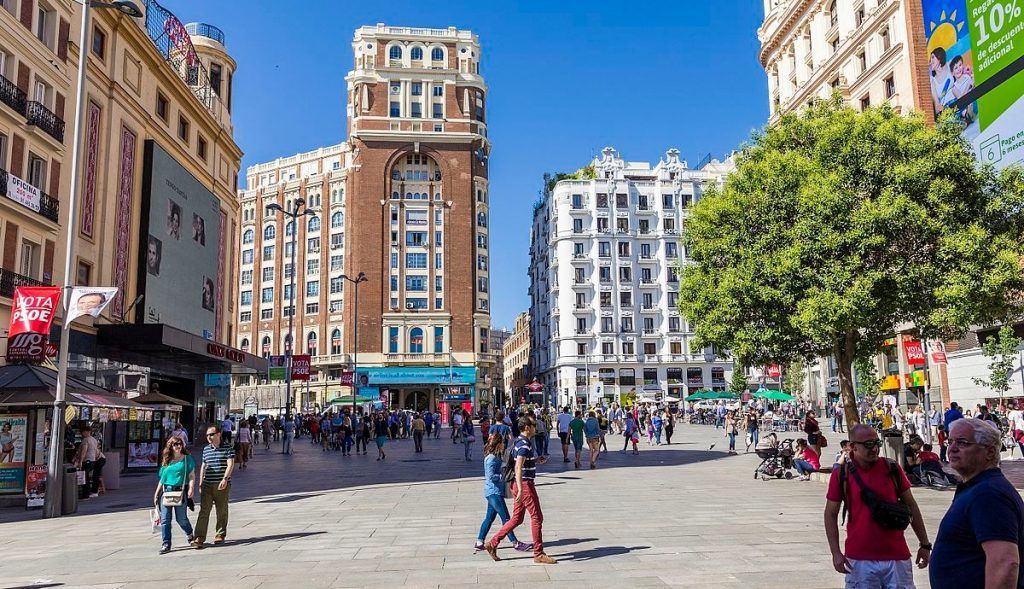 The skyscrapers through which we see the airship (the one that is full of moneyyyy) are known as the Four Towers, and that make up the landscape of Madrid’s business area. If you go you’ll see mostly offices and shops. 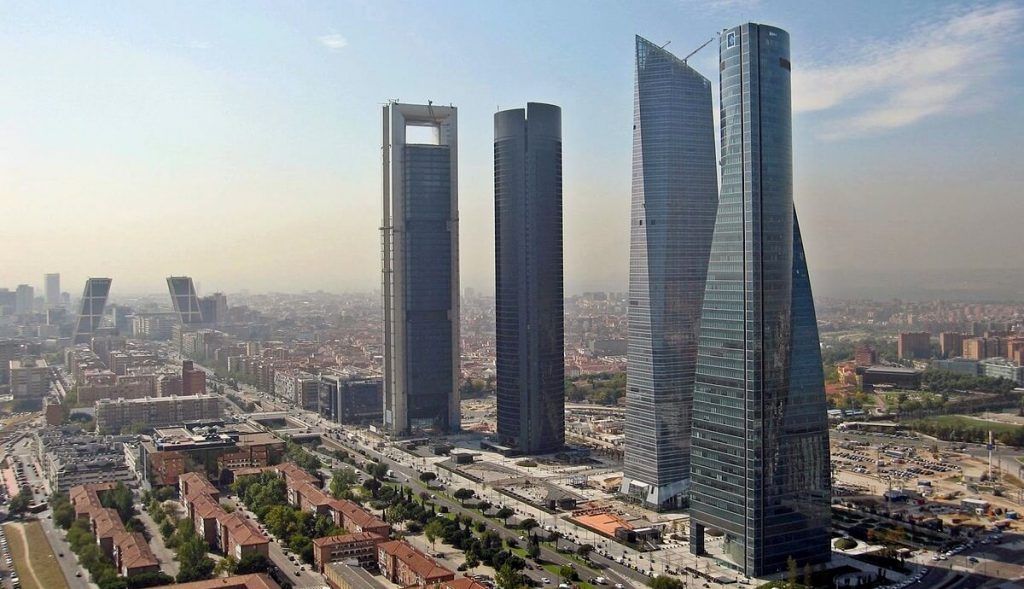 Professor Salvador brings together all the gang into Casa de Toledo to plan the heist. But in reality, this house-palace with gardens is not in Toledo city but in Torrelodones (Madrid).

It’s located in the middle of the Regional Park, a protected natural area, very close to the Guadarrama River. To simulate a dinner with beers as in the show, you’ll have to organize your own event there… or be invited to a wedding! 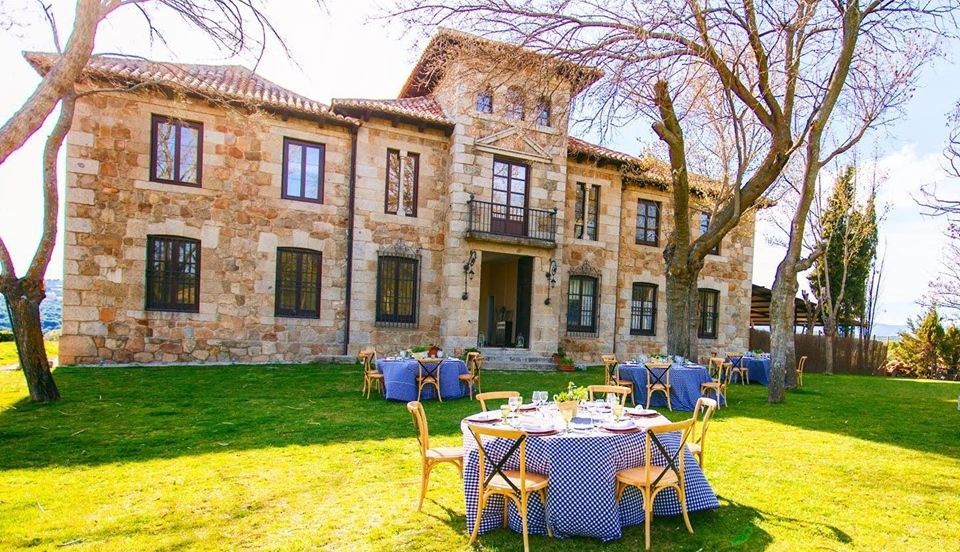 The façade of the Bank of Spain in the series is actually the complex of the headquarters of Ministerio de Fomento, the Ministry of Public Works and Transport. It still has a noble-institutional feeling that made it really credible (although we prefer the real building as it’s much prettier!)

The interior that appears in the Netflix series, doesn’t belong to the real building either, is a totally free creation that has been made in the tv sets of Madrid Content City. The film production company tried to visit the interior of the Bank of Spain to recreate it, but the permit application was rejected for security reasons. Well, that makes sense, fewer chances that somebody tries to get into the vault! You can only find similarities in the four banks of the main hall of the building. 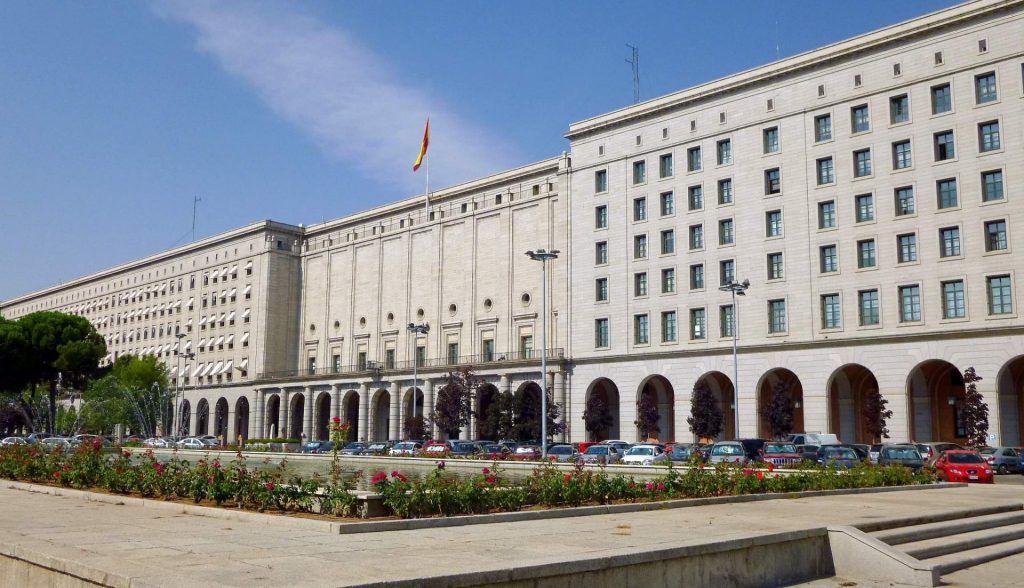 Italian monastery vibes… but in Spain. The big mansion where Berlin pretends to be writing his treatise on theological philosophy, is actually 140 km far from Madrid city center, in the province of Segovia.

It’s a natural place very popular among the inhabitants of the city that seek to spend a day in nature: the natural park of Hoces del Duratón. From the viewpoint of San Frutos, you’ll have the best panoramic views of the Duraton River and also one of the scenarios that caught the attention of thousands of fans: the Hermitage of San Frutos.

We’re still in the monastery where Professor, Berlin, and Palermo (Rodrigo de la Serna), plot that crazy plan to get the 90 tons of gold. But the spectacular cloister that we see in the series, is not part of the aforementioned hermitage, but of a renovated venue that in real life is used for all kinds of events, magazine photoshoots and as we see, also tv shootings! 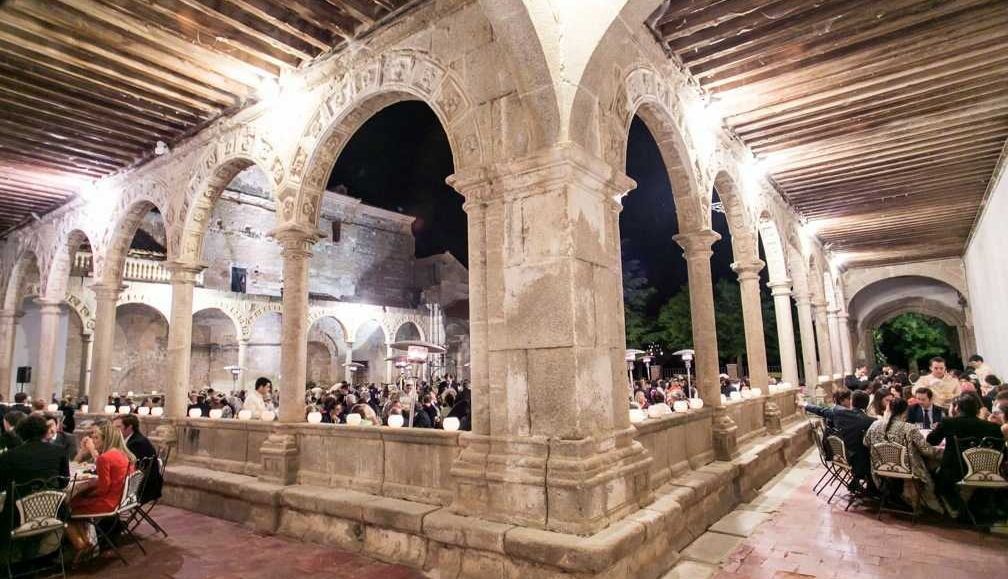 The last season begins with some paradisiacal scenes of “Isla Pelícano”, the place where Tokyo (Úrsula Corberó) and Rio (Miguel Herrán) are hiding. Actually, it’s an archipelago of almost 400 islands scattered along the Caribbean coast of Panama. An exclusive ecotourism destination, that after the show has become even more popular.

Some of the companies that offer sailboat and catamaran tours have started to stop on the islands where the shooting took place. If you have the opportunity to end here (without having to rob a bank) you may not worry about the exact location as long as you have fresh coconut to drink from, and a hammock to lay down, right? 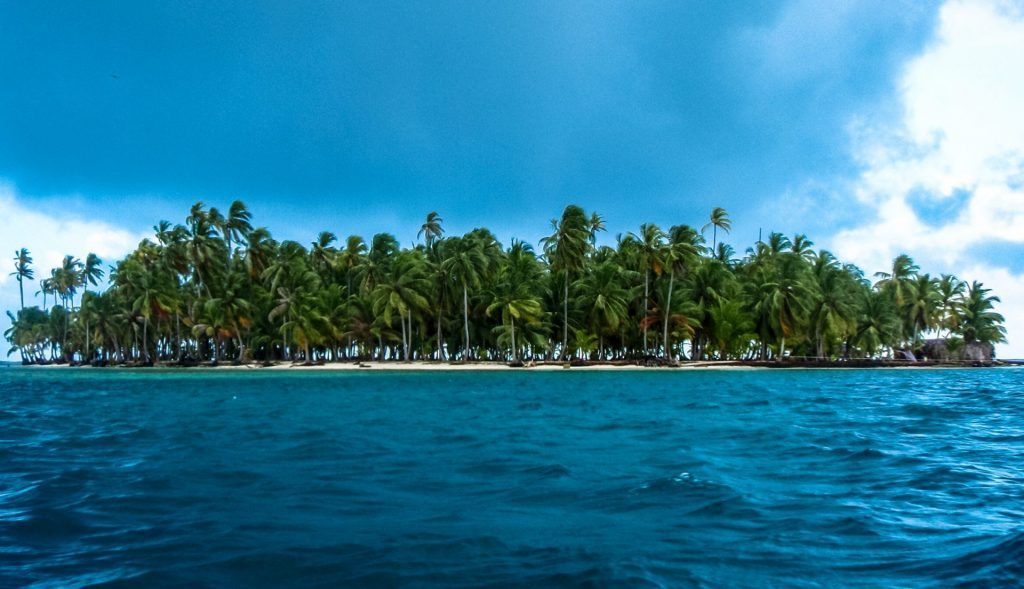 The flashback of the first season’s episode takes places in Florence. We get to see again Berlin (Pedro Alonso) with The Professor, because according to the timeline of the series, it’s five years back in time, when they started planning to dock the Bank of Spain.

The scenes of the meeting were shot outside the Cathedral Square and Michelangelo Square. Two beautiful locations of the Italian city, which certainly did not need publicity in a series to enjoy popularity! 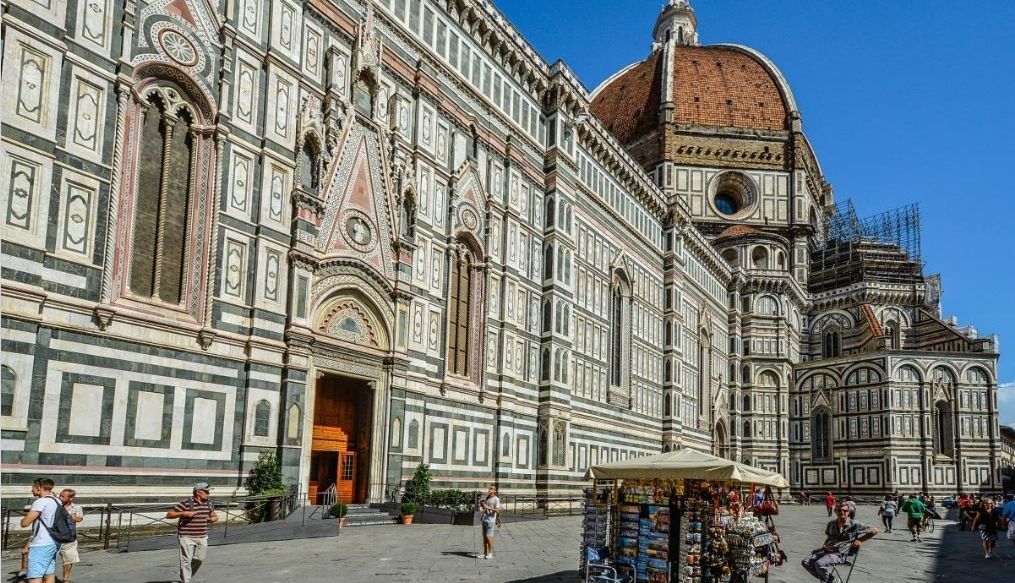 LIVE YOUR OWN ROBBERY IN MADRID

After the success of La Casa de Papel Escape Room, this new immersive event comes as a result of the collaboration between Netflix and Fever, which will be available in three cities! The three targets for the new robbery will be La Monnaie in Paris, the Bank of São Paulo and Palacio de las Alhajas in Madrid.

La Casa de Papel Experience in Madrid consists of a great robbery to obtain the jewels from the Palacio de las Alhajas. You’ ll experience scenes and sensations inspired by the series ‘La Casa de Papel’ in first person, being part of the group of thieves. In addition, the experience will feature a pre-show to introduce participants to their role, and a post-show where you can enjoy drinks and special snacks, in a fully themed bar!

You’ll be provided with the costumes so you can have a proper souvenir at the photocall. Visit their website to keep an eye on the release date this 2020! 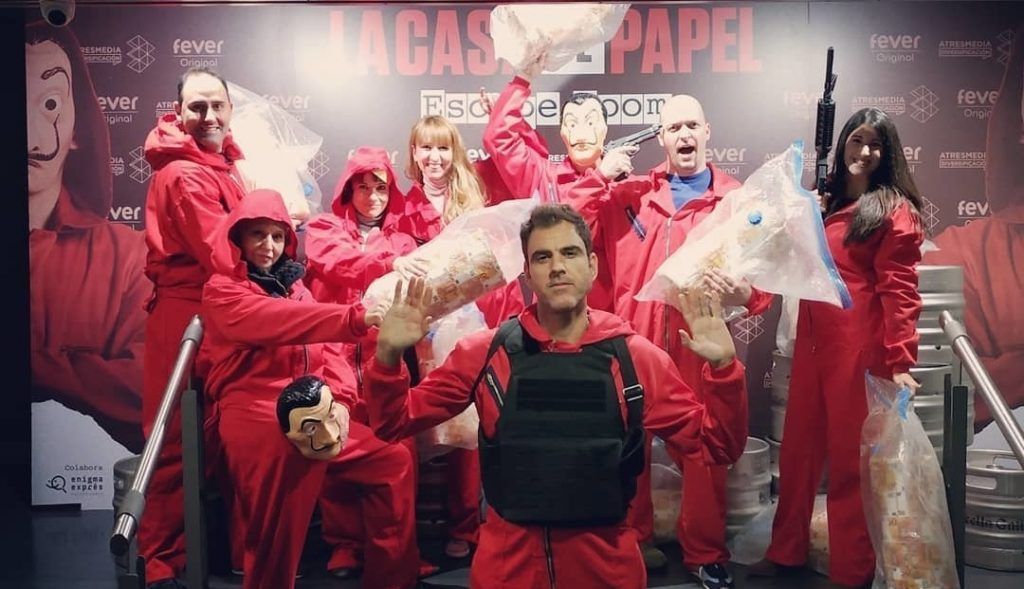