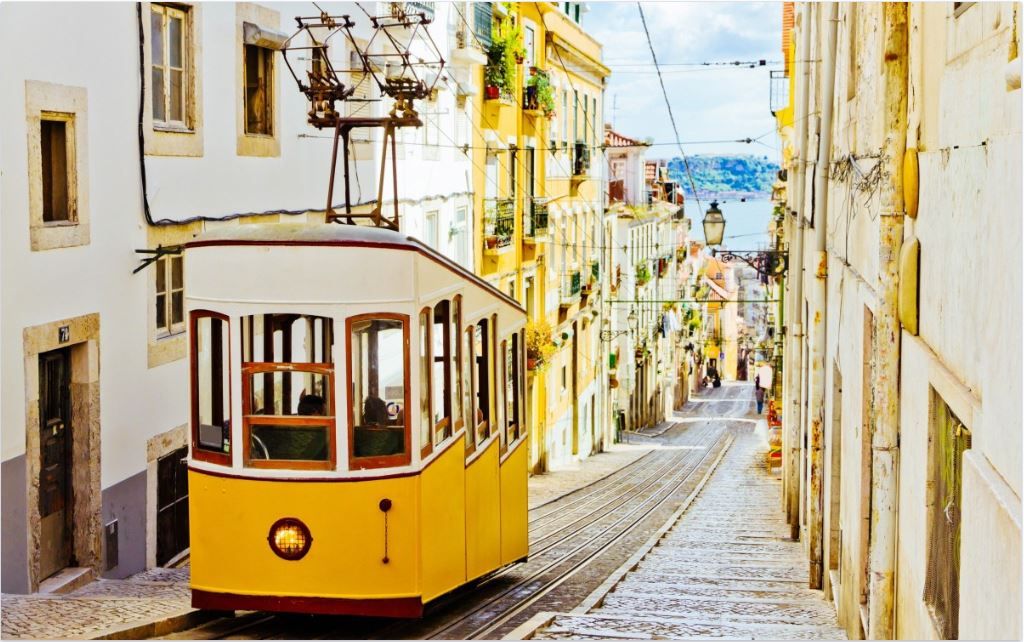 Welcome to Portugal’s city of light! You’re about to find out what to see in Alfama, when the best time is to visit the Barrio Alto, and why Belem is the sweetest place in Lisbon. Soon you will be an expert and know exactly what to do in Lisbon for 3 days. There is more than enough time to check out the surroundings for a day and venture out to the beach or woods!

Let’s start with Baixa, Lisbon’s most centrally located, commercial district. Rua Augusta is its main street, full of shops and cafes. When you get to the end, you will see the Arco da Rua Augusta. Upon passing it, you’ll be right at Praça do Comércio and will see the Tagus river in front of you. It’s one of the largest squares in Europe, surrounded by three large arcaded buildings. Do you love taking in panoramic views? You’re lucky because you can visit the triumphal arch and climb to the lookout point at the top! 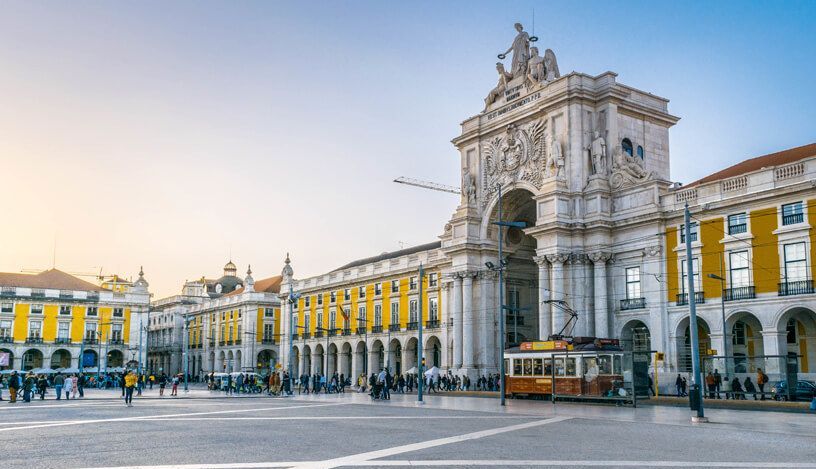 Avenida da Liberdade is the longest avenue in Lisbon.  It was designed in the same style of Paris’s Champs-Elysees, filled with grand buildings and luxury shops in case you want to do… a bit of window shopping ????

Rossio Square is famous for its black and white wavy mosaic floor. Here you can admire the beautiful Rossio train station, which has a facade that looks more like a theater. There’s actually a real theater inside, by the way, the Théâtre National Dona Maria II, made in the neoclassical style. 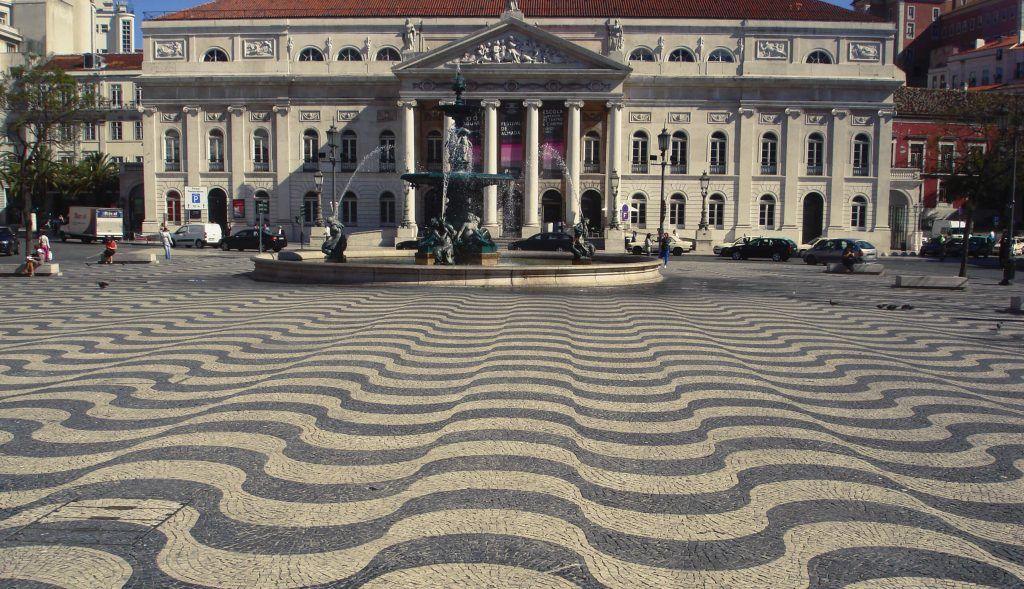 Another must-see monument is the Santa Justa lift, but it may not be worth it to go on it, since you can easily walk up the small hill, and you won´t waste time waiting in line! Once you are upstairs, if you’re still interested in taking in the views, you can access the viewing terrace for €1.5 (instead of buying the €5.30 ticket). By the way, if you have bought the Lisbon card, you’ll have free entry and discounts on attractions. You should also buy it if you plan to use public transport frequently. 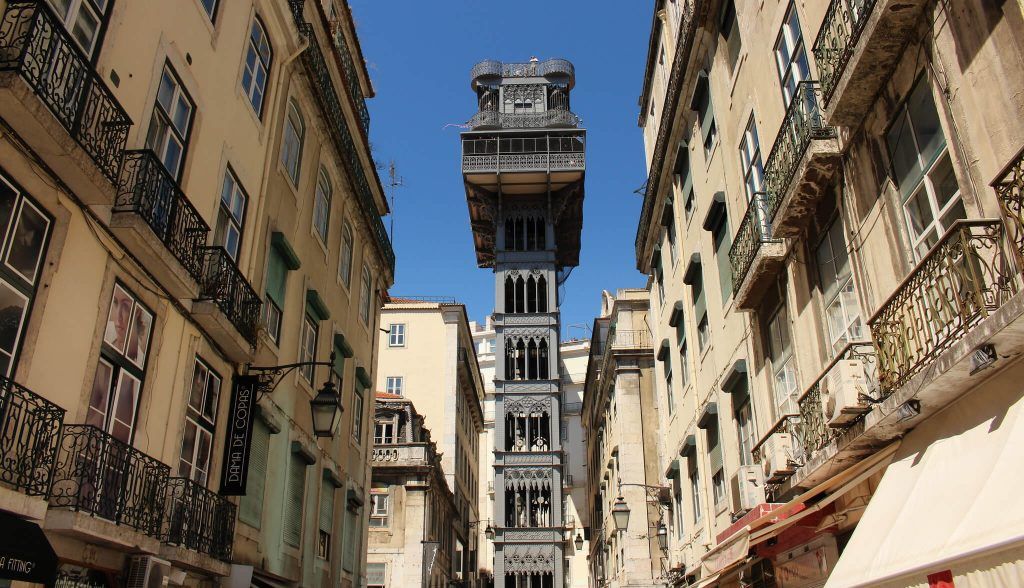 Once you’re up the street, either by elevator or on foot, you’ll find one of the most beautiful squares in Chiado: Largo do Carmo. Its main attraction is Chafariz do Carmo, a fountain located in the center, which in the past supplied water to the neighborhood. From here it is easy to access the Convento do Carmo, which was the most important Gothic temple in Lisbon until the earthquake of 1755 caused some damage. Today the convent ruins are home to the Archaeological Museum. 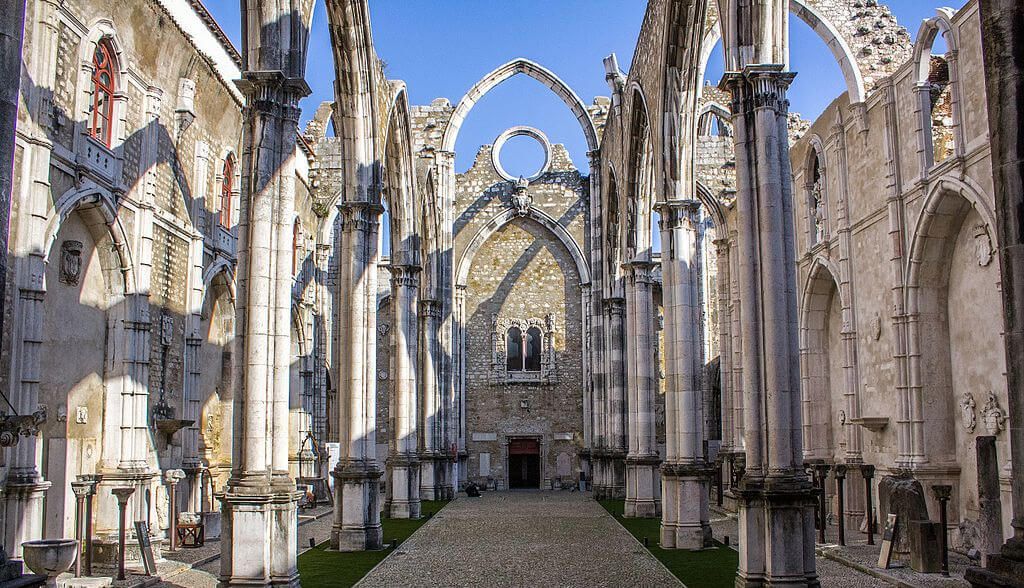 The Chiado district is like a mini Paris in Lisbon.  It was preferred by intellectuals and the bourgeoisie for having so many coffee shops and bookstores. Today there are still many bookstores including the one that holds the Guinness record as the oldest operating bookstore in the world, the Bertrand Bookstore. One of the popular cafés for social gatherings at that time was Café a Brasileira, which is also still in business. Outside you will see the Fernando Pessoa statue, one of the most well known Portuguese writers. This statue is a popular photo-op for visitors.

Also in Chiado, is one of the most photographed tile buildings in Lisbon: Casa do Ferreira das Tabuletas. 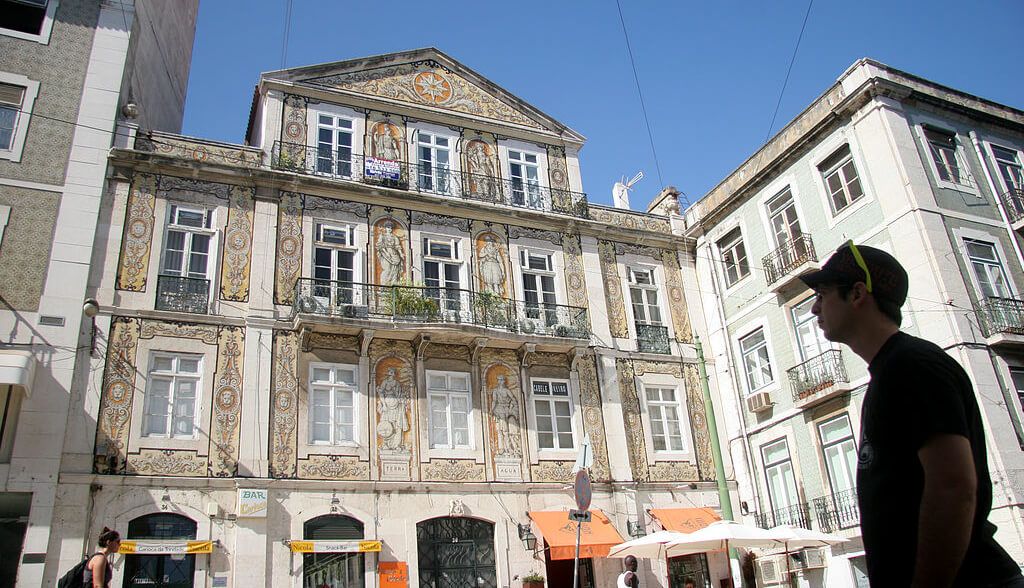 Alfama district is a delight for all your senses! And one of the best ways to explore it is with the mythical Tram 28 (also known as Eléctrico 28). Perhaps it’s easier to take it on the way there and then venture yourself walking down the hill discovering the neighborhood.

Among the attractions, you cannot miss the Lisbon Cathedral, known as Sé de Lisboa. Admission is free, but visiting the cloister and the treasures costs €4. Casa dos Bicos is named after its facade of carved stones in the form of diamond tips or spikes, in Portuguese “Bicos”. 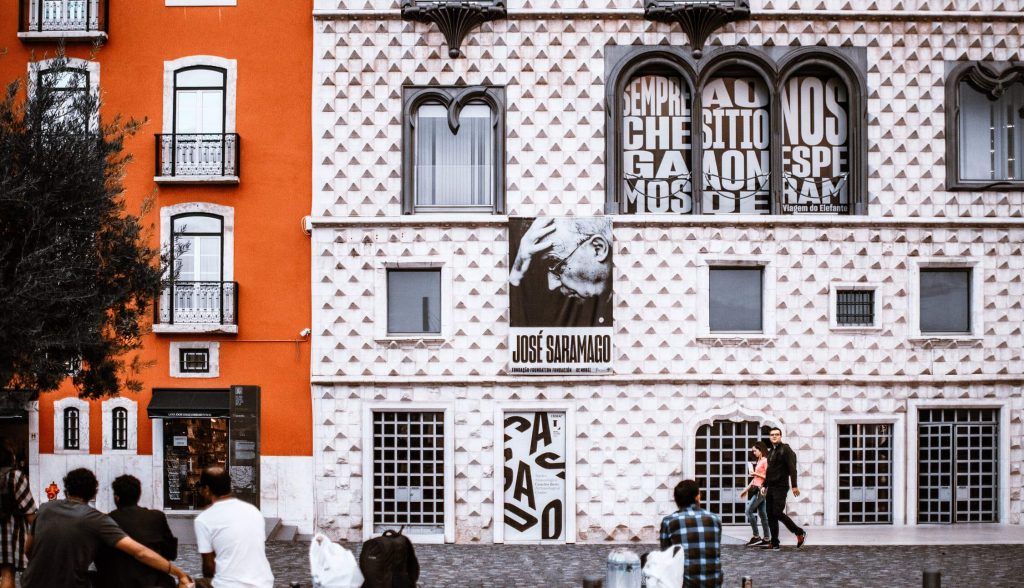 Miradouro de Santa Luzia, is one of the most romantic viewpoints in the city, but of course, in Alfama everything seems romantic! It is recommended to visit at any time, but especially at sunset. If you find any artist playing live music, it will be simply magical.

Finally, São Jorge Castle boasts the best views of the east side of Lisbon from the top of its fortress. The tram does not stop outside the castle and there is a very steep slope. Luckily for you, there is a comfortable, fast and free elevator! 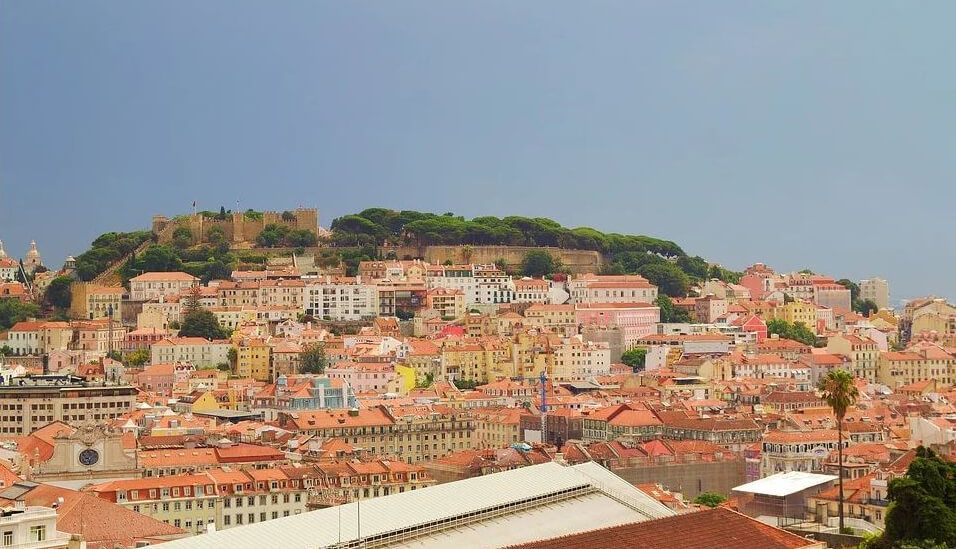 If you’re not happy about spending €10 to enter the castle, the truth is that you can enjoy good views too from the highest viewpoints for free! For example, Miradouro da Senhora do Monte. What can we say… we’re in love with Lisbon’s viewpoints! To keep the romantic mood going, what’s better than a night of fado. The best shows can be found in Mouraria or Alfama, but don’t forget to make a reservation for dinner. 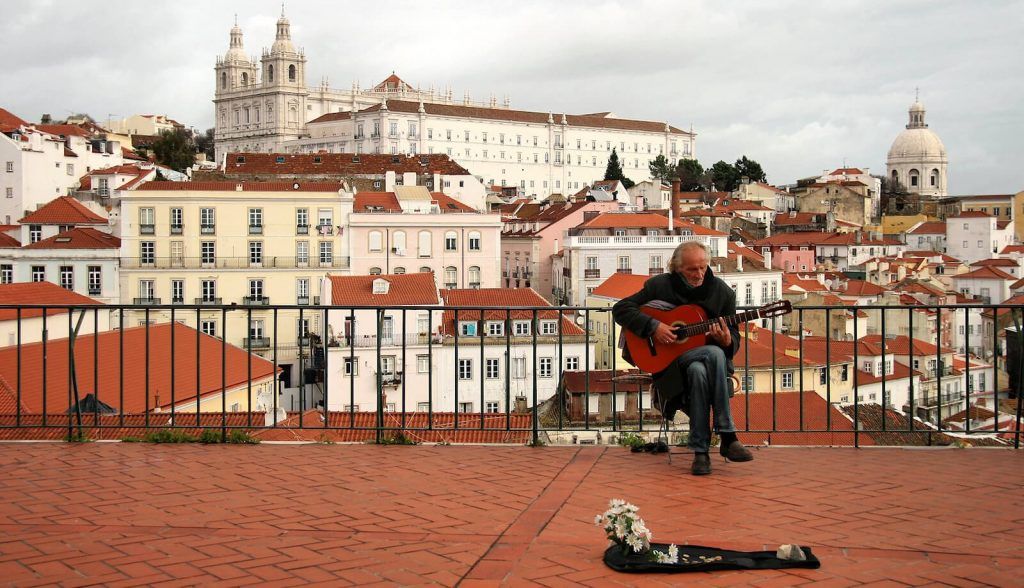 Extra tip: If you are absolutely amazed by the city tiles, or you need to elevate your Instagram to another level, don’t miss the Museu Nacional do Azulejo. It’s somewhat further from the main tourist area, but it’s stunningly beautiful. Wherever you look, you’ll want to take a picture. The museum even has a church inside! By the way, going tile-hunting is one of the best things to do in Porto.

Belem district is a must see when visiting Lisbon: it has charm, history, culture, beauty … and custard tarts. Yes, you came all the way down here to try their pastel de nata, admit it! Try them as soon as you arrive, or maybe when you leave, for breakfast, or as an afternoon snack, your choice, just make sure you do it at the Fábrica de Pastéis de Belém. Their pastel de nata secret recipe dates back to 1800!

You have to visit the Jerónimos Monastery, one of the most impressive you’ll see in the city. The exterior facade, as well as its church and cloister are full of decorative elements worth seeing. 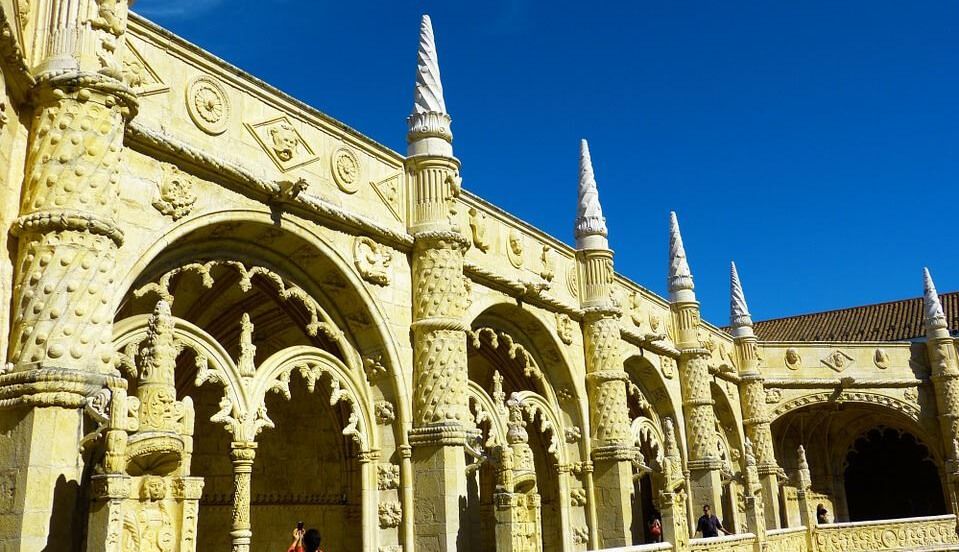 The other top attraction in this neighborhood is the Belém Tower, an old defense tower. It’s beautiful from the outside, but there is no need to visit the inside! Yes, take our advice, there is no need to visit inside. For better views, take a moment to sit on the banks of the Tagus river at the Padrão dos Descobrimentos.  It has a facade of about 50 meters high that commemorates the great navigators and discoverers of Portuguese history. Below your feet, it has a 50-meter wind rose: a mosaic with a world map in the center that gathers the chronology of the discoveries. 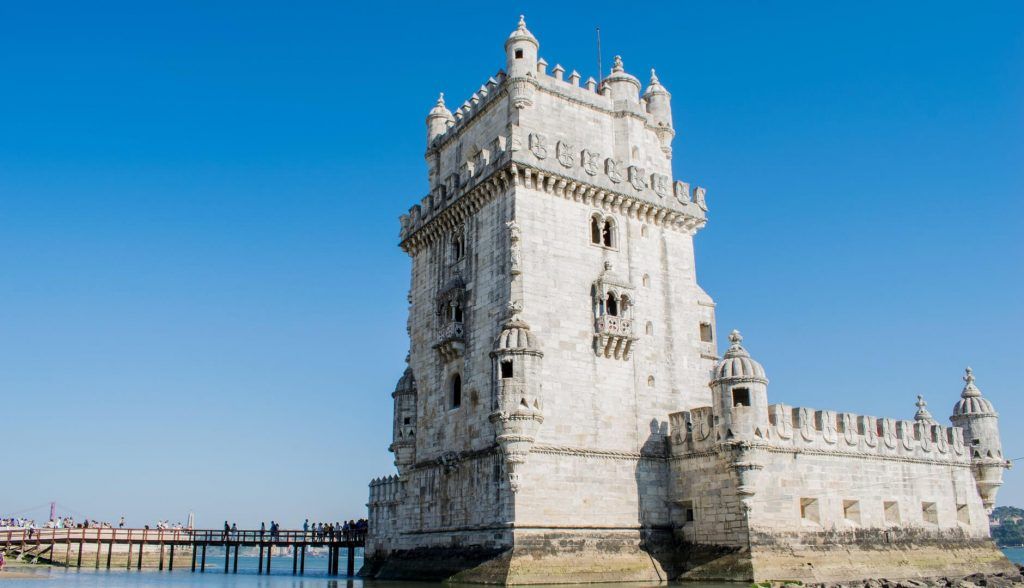 AN ARTISTIC AND ALTERNATIVE AFTERNOON

If you like contemporary art and because you will still be in the area, you can visit the MAAT, a museum in an old power station. There’s a space for temporary art exhibitions, and the museum of the old electric, with its boilers, generators, and the like. 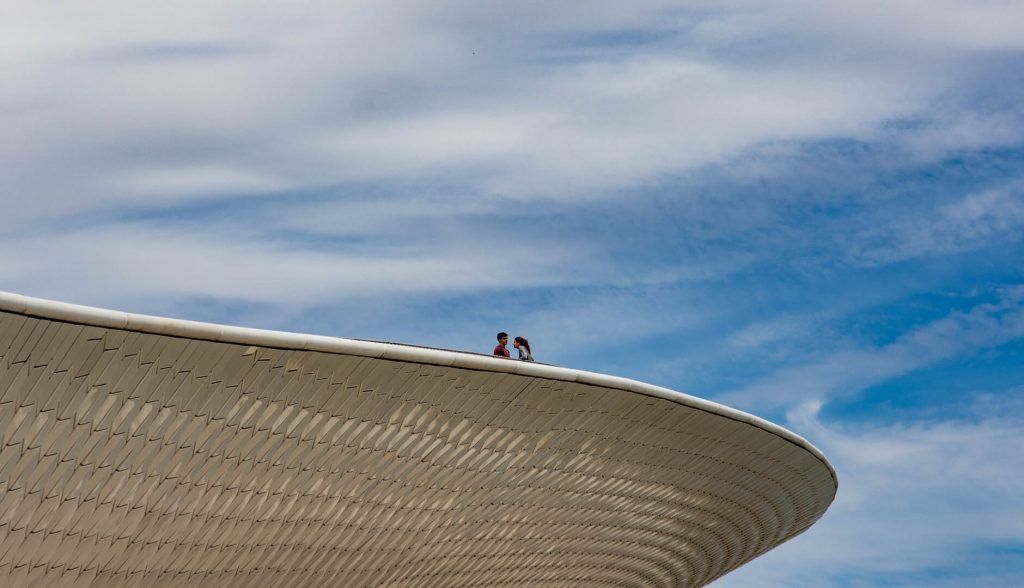 LxFactory is an ​​abandoned factory converted into a large space for creativity, leisure, and gastronomy. Get lost in its galleries, concept stores, and don’t miss the Ler Devagar bookstore (in an old newspaper press). Here, all bars and restaurants are cool. Cantina, for example, is inside an industrial building from the last century. It has vintage furniture, a mixture of different styles and a wood oven in the center where some of the dishes are cooked.

Take your time exploring the area and don’t miss Village Underground, an area of ​​artistic expression with containers, buses that you can hop on, an urban garden, and even a half-pipe! For a picturesque sunset, go up to Rio Maravilla, a restaurant on the fourth floor of one of the old factories overlooking the river and the Ponte 25 de Abril! 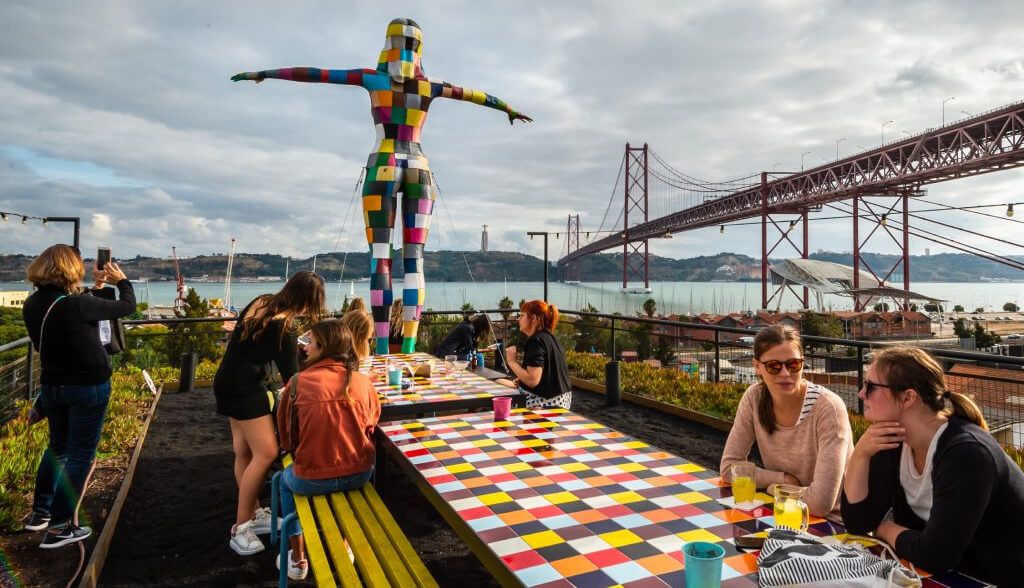 When you get back to the center, a good idea is to stop at the Mercado da Ribeira (Time Out Market). It’s one of those street food markets popular in many European cities and eating here is worth it. It might look very fancy, and there are also some well known Portuguese chef’s stalls indeed, but other traditional offerings too, and tiny stalls to taste international bites.

The Pink Street is undoubtedly one of the best things to do at night in Lisbon. It’s located on Cais do Sodré street, which is called that because it is painted pink! A few decades ago it was the red light district of Lisbon, but now is a place to go out from bar to bar making international friends. Make sure to visit Pensão Amor and Music Box! 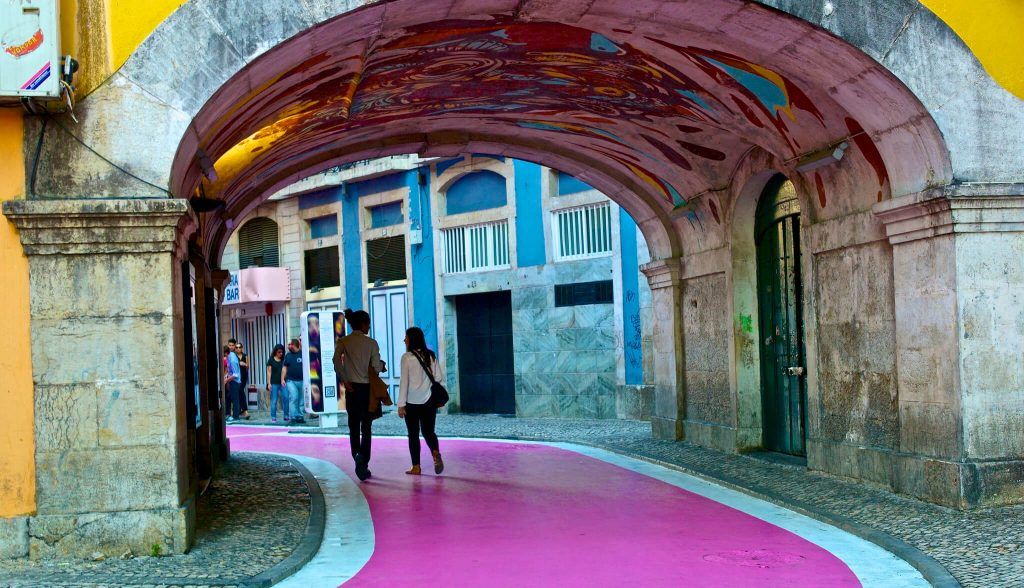 DAY 3: THE MAGIC AROUND LISBON

Our list of tips for what to do in Lisbon for 3 days wouldn’t be complete without a recommendation to spend a day or halfday visiting the surroundings!

Another option is to visit Cascais. There are even some adventurous souls who dare to rent a car and see Sintra in the morning and Cascais in the afternoon! It’s a fishing village, and the town’s main appeal is its beaches and cliff formation named Boca do Inferno, so yup, we could say that it is mostly a summer day trip.

The white sandy beaches of Costa de Caparica, are known for their great extent and cleanliness. There is a tourist train that runs in summer and connects the town of Caparica with the beaches. But they are well connected as well by bus and ferry. The small beach of Vila da Costa is the favorite of surfers, Acacias and Acacias Sur beaches have a young atmosphere, and Playa dos Medos has many trendy bars. 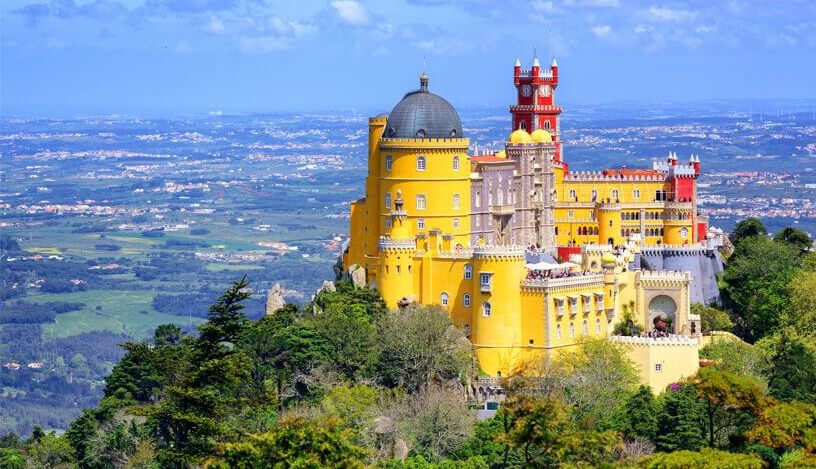 THE BEACHES OF CASCAIS OR COSTA CAPARICA

Another option is to visit Cascais. There are even some adventurous souls who dare to rent a car and see Sintra in the morning and Cascais in the afternoon! This one is a fishing village, and The town’s main appeal is their beaches and eroded cliffs named Boca do Inferno, so yup, we could say that it is mostly a summer day trip.

The white sand beaches of Costa de Caparica, are known for their great extent and cleanliness. There is a tourist train that runs in summer and connects the town of Caparica with the beaches. But they are well connected as well by bus and ferry. The small beach of Vila da Costa is the favorite of surfers, Acacias and Acacias Sur beaches have a young atmosphere, and Playa dos Medos many trendy bars. 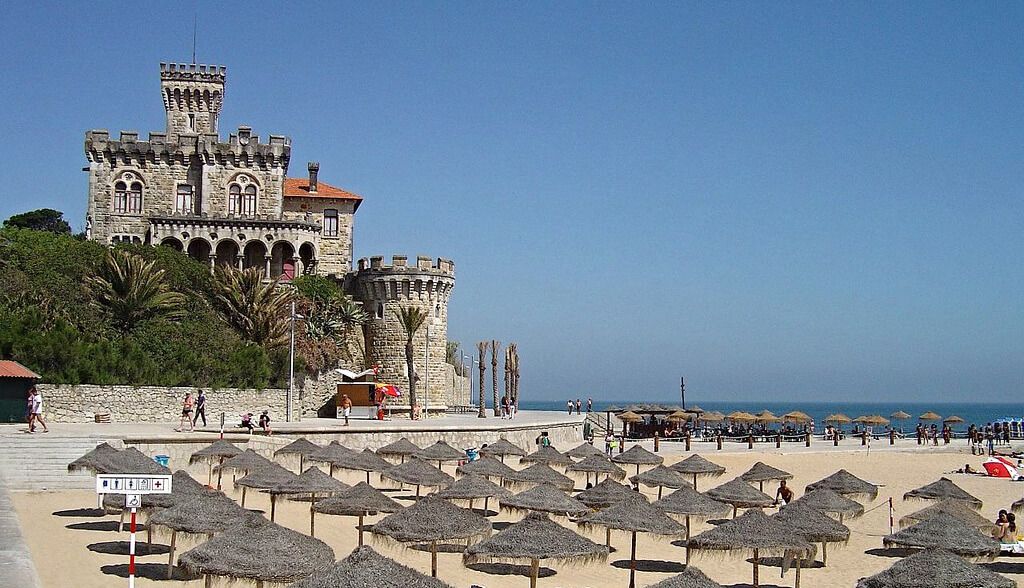 Back to Lisbon, you don’t want to leave this city without having an epic night partying! Have no doubt: head to Bairro Alto, one of the best party areas in Lisbon. In the morning the neighborhood is quiet, but at night it´s bustling! It’s full of bars, small ones for a cocktail, medium-sized bars with live music, and many big clubs to dance the night away!

Let yourself go from bar to bar or ask groups of happy Lisbon students you’ll find in the streets for advice! When the bars are crowded, you’ll see people standing outside with their drink, so there is lots of opportunity to mingle with anyone you please. 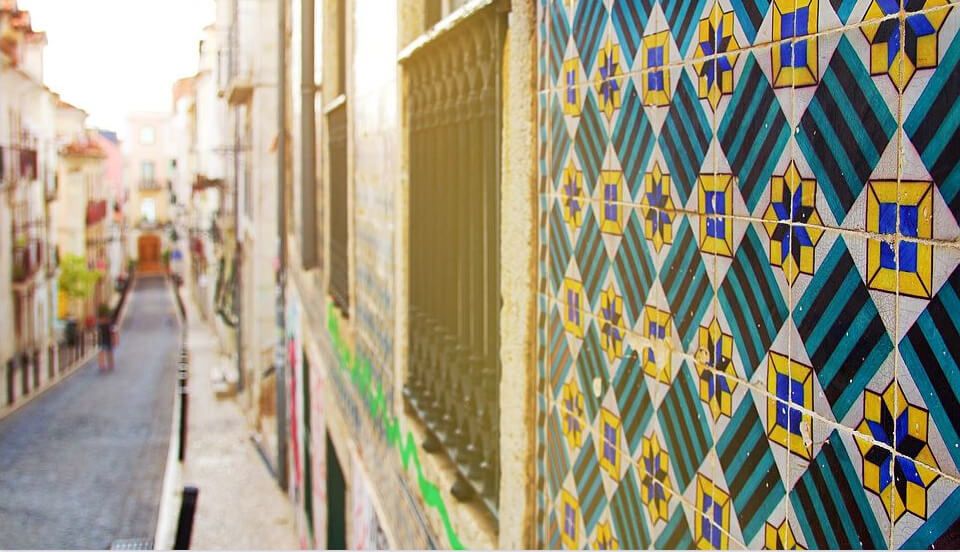 Maybe you want to start the night dining in the area, so you won’t have to climb up the district up with a full stomach (yes, it is called the “high neighborhood” for a reason). If you want to buy your booze and drink in the street, head to Jardim de São Pedro de Alcântara, but go to Maria Caxuxa for superb caipirinhas and good music, or to Tasca do Chico to listen to fado. If you’re looking for alternative music, pay a visit to Incognito, and for the best gay atmosphere, try the surroundings of Praça do Príncipe Real. 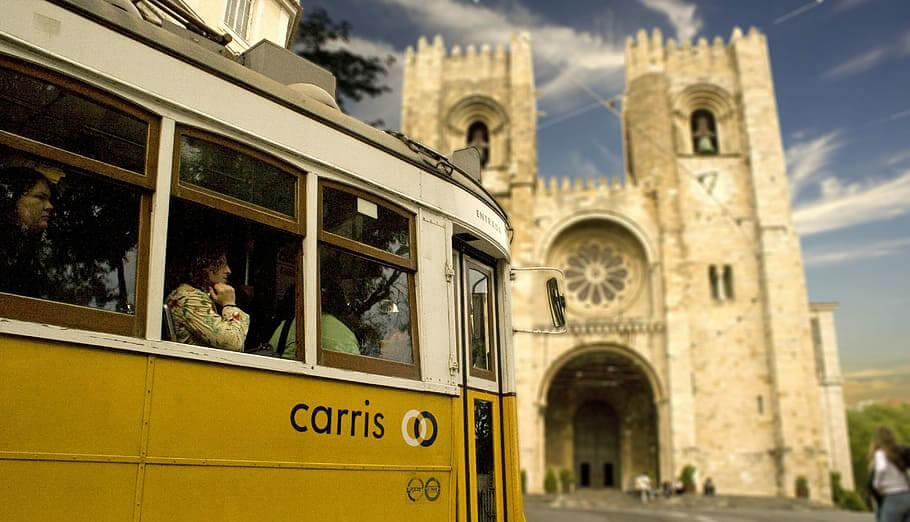