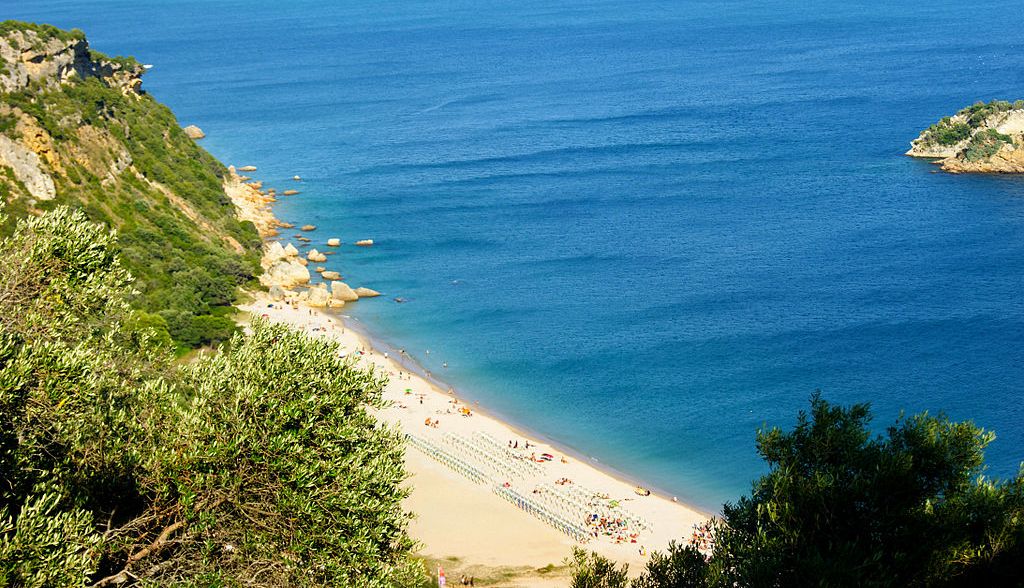 BEST BEACHES IN LISBON (PORTUGAL) | YOUR BEACH GUIDE FOR SUMMER 2021

Lisbon is a city surrounded by water, which makes it the perfect destination for both city tourism and beach tourism. The Tagus River is the most predominant during an urban getaway, as it is visible from the center, from the lookout points, or from almost any neighborhood! Of course, once you go south or west, your eyes will be on the great Atlantic Ocean. It is in these two directions where there are the best, most well known beaches in Lisbon, which are the beaches of Cascais, the Estoril Coast and Caparica Coast. 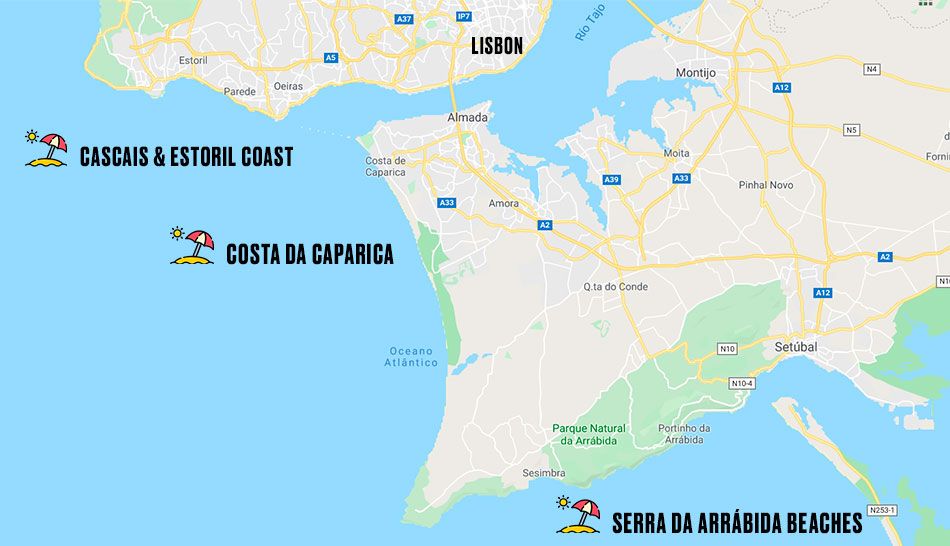 Costa de Caparica is 30 kilometers of coastline with sandy beaches. It’s the preferred area by the people of Lisbon and is located south of the Tagus, so if you have done your research, you would have already realized that you must cross the river to get here, either by bridge or by sea!

The most comfortable option is, of course, to go in your own car, but if you don’t plan to rent one, don’t worry, it’s easily accessible by public transport:

Bus 153 stops at several stations between the north and south of the city. Here you can check the schedule and the stops it makes.

Bus 161 also has several stops and runs until 10pm.

Both take you to the town of Costa de Caparica. Once here, you’ll be able to take the tourist train that connects the town with the beaches if you go during the summertime (from June 1 to September 30). It stops at the most iconic Lisbon beaches, but keep in mind that the last train returns at 7.30pm! If you want to stay later to see the sunset, you should go to one of the beaches closer to the town. 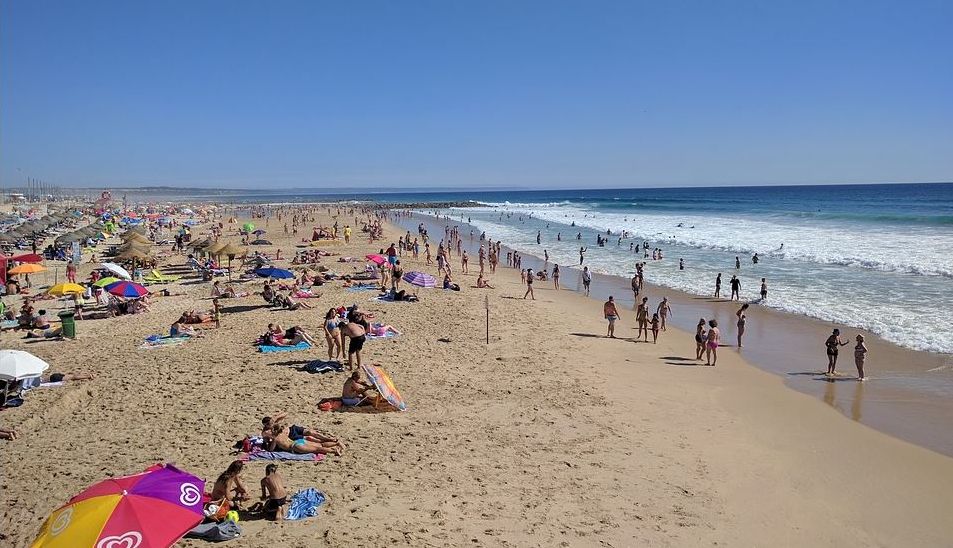 Choosing this option means getting on the ferry and then taking another bus to reach Costa de Caparica. It may seem like an extra and unnecessary complication – especially if you also want to take the tourist train to get to the farthest beaches – but it’s not as crazy of an idea as it seems in high season. The traffic jams on the April 25 Bridge back home can be horrible!

If you want to travel by bus and ferry:

Bus 124 will take you to the Calcilhas jetty, and from there, take the ferry that ends at the Cais do Sodré terminal.

Bus 129 will take you to the Trafaria jetty, and from there, take the ferry that ends at the Bélem terminal. 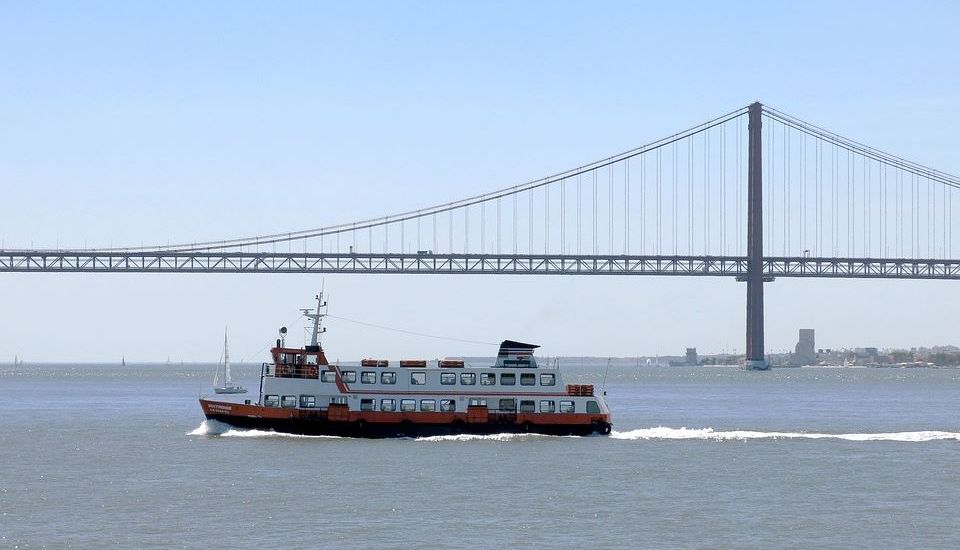 Now, let’s see some of the beautiful beaches where you can spend a relaxing day. Keep in mind that it’s not the same going on a Monday in May, as it is on a Sunday in busy August. You can either find yourself in a paradise only seen on postcards, or in a comedy movie about family vacations at the sea! And even if you forget you are near a city, just remember you are near indeed. And urban beaches have plenty of visitors. Let’s name our favorites based on their proximity to the town of Caparica:

You’ll find an extensive beach of fine sand, with a restaurant, a beach bar and lovely striped wooden sheds that will make you feel like you´re inside a postcard. Nearby, there’s a campsite and parking you can pay for. Here you’ll find international surfers to local families, to families of seagulls… 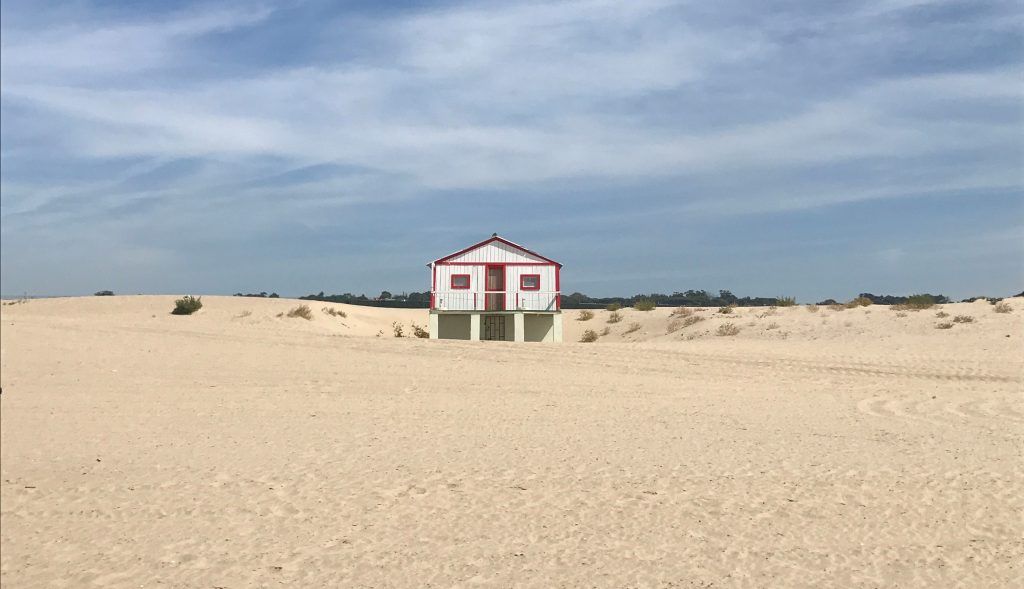 This is a spectacular blue flag beach, with crystal clear water, public toilets, and a surf school nearby. If you see fishermen with boats stranded in the sand, pulling their nets with tractors, you’ll be witnessing the traditional ‘Xávega’ fishing, a fishing practice typical of the towns without port. But some time ago, it wasn’t done with tractors, it was done with oxen! The fishing doesn’t happen on any particular date, although it is more common to see fishermen between spring and autumn, when the sea is quieter. 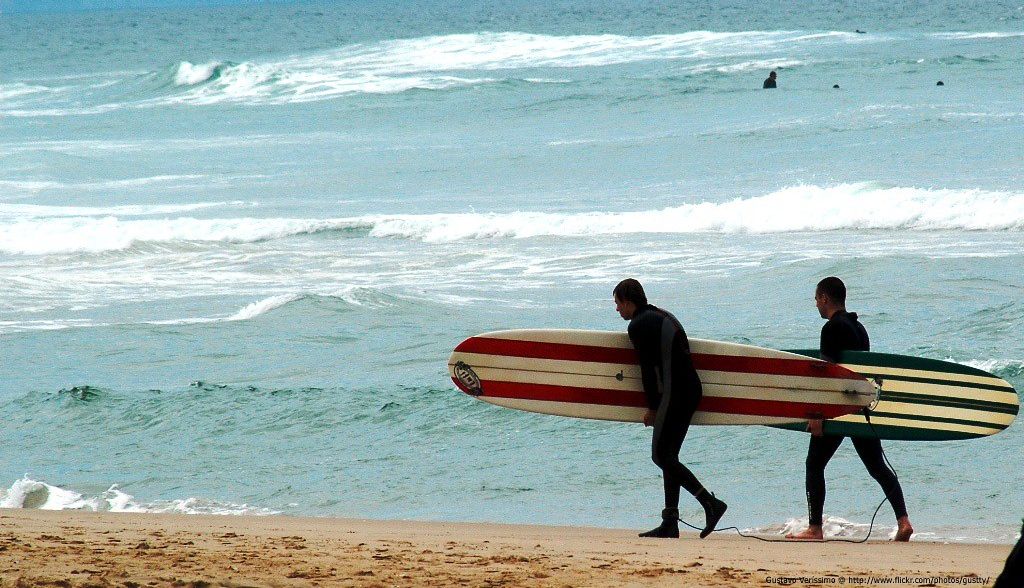 It’s an extensive beach with a younger atmosphere and a well-established restaurant that has the same name as the restaurant at Praia Do Castelo beach. During summer the service can be a bit slow, but you can eat very good fresh fish here. Relax and enjoy the views of the sea, you’re on vacation! Fun fact: it’s said that it received this name from the house in the form of a castle that is on the road before the access to the beach.

It’s one of the quietest Lisbon beaches. Thanks to its large size, you don’t feel overwhelmed even if there are lots of people. Come here either for water sports (surf, kite surf) or to sunbathe. The more south you go, you’ll reach the more risque part, and the nudist area! 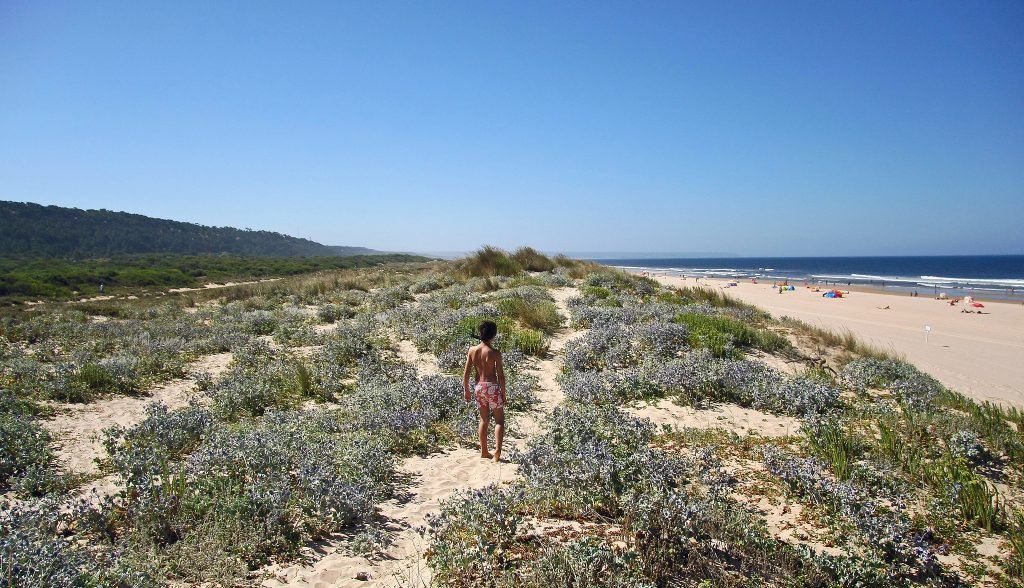 Beach 19 is the gay beach in Lisbon, a very large nude beach part of a Nature Reserve, and certainly one of the largest and most famous in Europe. It’s named after the nearest train stop, number 19. And we’ve heard that it’s better than any dating app! ???? It’s officially a nude beach, but if you want to keep your swimsuit on, that’s fine too.

This is the last beach you can access using the Transpraia train (it’s the last stop). It’s a bit windy here, and that’s why people come to it for kitesurfing. There are several restaurants and beach bars in case you forget to bring your picnic! 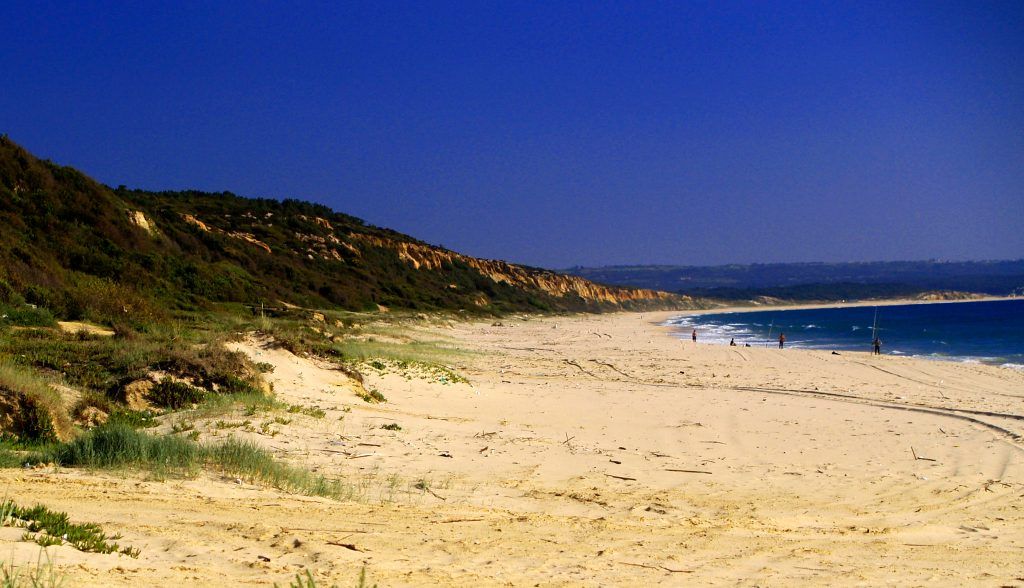 The beaches of Cascais and Estoril are a bit smaller but are connected by a promenade. You can move from one location to another in just half an hour. Due to its proximity to Lisbon, we find:

An urban beach with golden sands that is not exclusive to the summer, as many people walk the promenade in winter (when we say walk, we also mean run, go on roller skates or bike!)

So, if the weather doesn’t look right you can take a pleasant walk and sit on a terrace overlooking the sea. The prices for this area are cheaper. 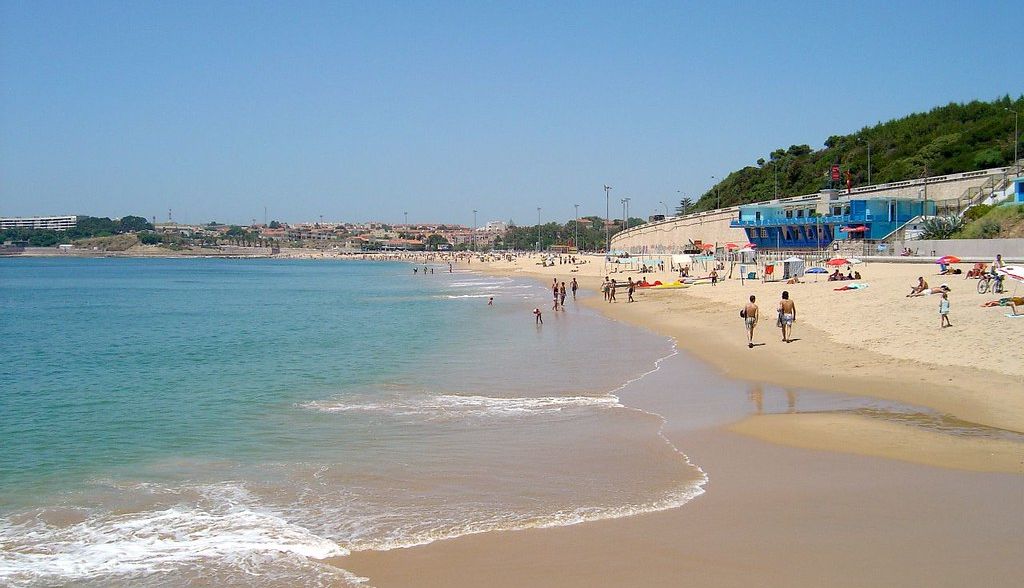 It’s the most crowded during summer. Both local residents and visitors staying in Lisbon gather here. It’s perfect for going on weekdays and to do some surfing. You can arrive by public transport from the Cais do Sodré suburban station. The train drops you 6 minutes from the beach (walking). If you go by car you have to pay to park in a parking lot. Stay to watch the sunset, it’s amazing! 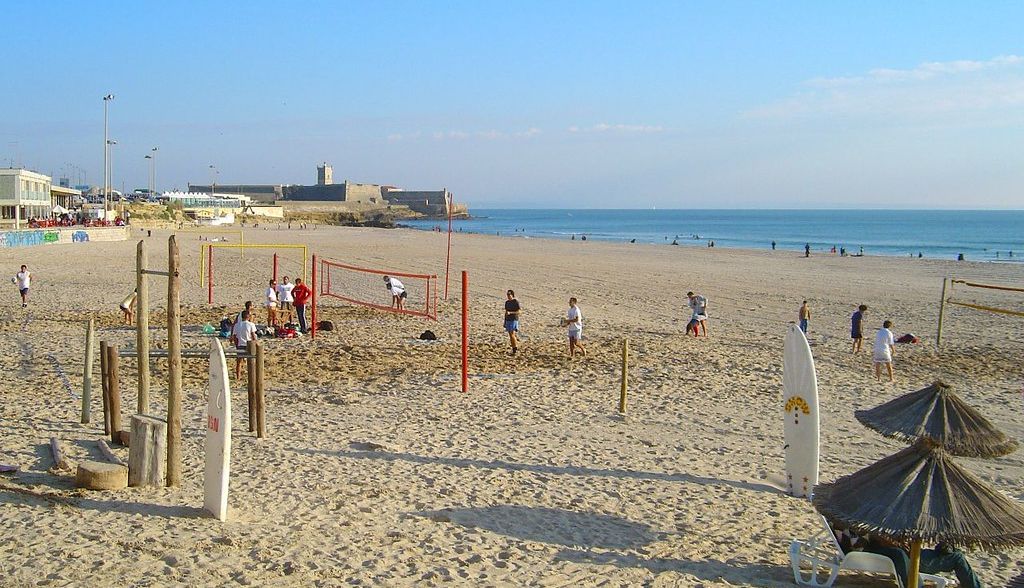 This is another one of the most visited Lisbon beaches, thanks to its proximity to the city -from Cais de Sodré train station it takes only 30 minutes- And once in Estoril, the beach is easily accessible since the station is literally a few meters away! It’s not too big, but it is well maintained, and the water is very clean. If you don’t have your own umbrella there is a rental area. The biggest attraction is perhaps the São Joao do Estoril (castle by the beach). To top it off, if the tide is high, some cool natural pools are formed.

A fun fact: Estoril was the home of the spy who inspired the character James Bond. In its Casino some movie scenes were shot and it’s 15 minutes by foot from the beach, in case you feel like gambling a bit! 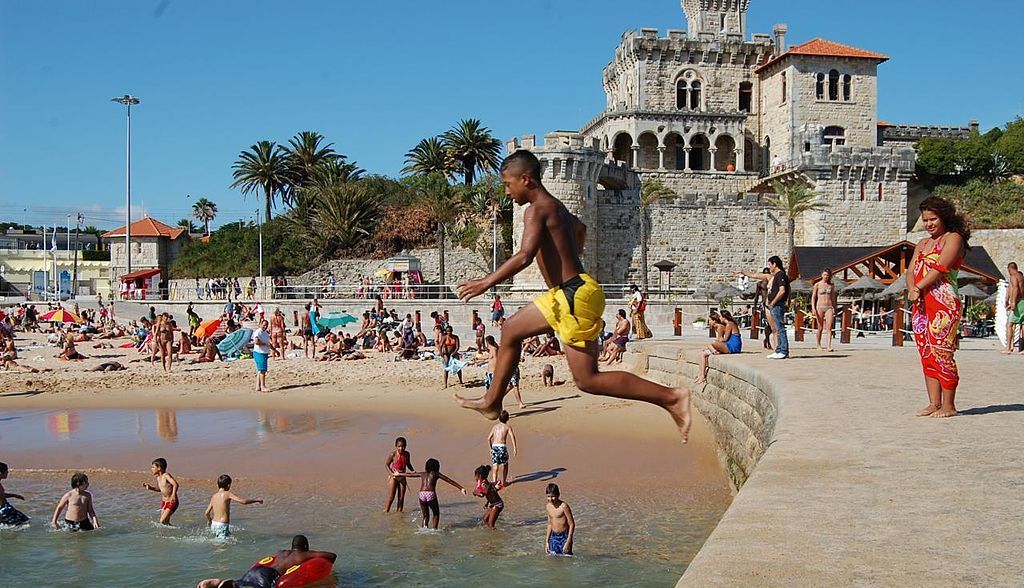 It’s the closest beach to Cascais station which makes it one of the most visited by people of all ages. The city of Cascais is one of the best day-trips from Lisbon during the summer: there are beach bars, cafes, restaurants and calm waters. What else could you possibly need? It shares some common space with Praia da Duquesa, it looks like the same beach but they are two different ones!

The beach of the “Queen” is a coquette and perfect for a bath, but very small (careful with taking a front row seat, the tide rises!) It is protected from the wind because it is in between rocks. And it’s also a few steps away from the station!

The further we move away from the coast, the wilder the beaches we find. Praia do Guincho is inside the Serra de Sintra National Park, pure nature! It has large waves and gusts of wind, so it is not highly recommended for swimming, (and it’s cooold) but it’s suitable for water sports (and to take a break from the crowds). To get here without your own car, you can take the bus 405 or 415 bus from Cascais station. 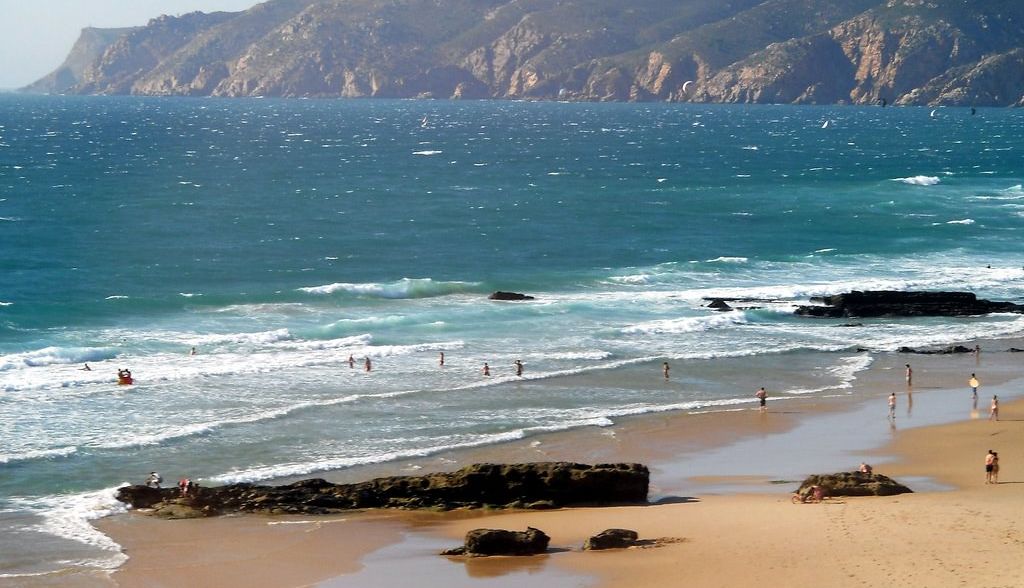 By now, you’re quite an expert about Lisbon beaches so you can complete your urban getaway with a swim in the sea. But if you rented a car and have more days to spend, we encourage you to venture into Serra da Arrábida where some of the best beaches in Portugal are. And much less crowded than those in the Algarve!

In a dreamlike natural enclave, the Sierra de Arrábida, we discover the beach of Figueirinha and its white sands and clean crystalline waters. -any snorkel lovers around?? It’s one of the busiest in this area because of its proximity to the town of Setúbal. So, get up early to secure a place in the parking lot – or wait for cars to leave to get in. There are no restaurants here, just a small beach bar for drinks, so bring your own snacks!

In 2017, it was voted the most beautiful beach in Europe according to the readers of the European Best Destinations website -an honorable title considering that people from all over the world get to vote!

The first thing you have to know is that it is not very easily accessible, and that proper footwear is required. The way down is not everyone’s cup of tea … You have to park your car far away. In summer the traffic is cut (from the end of June to September) but a bus takes you for free from the beach of Figueirinha. But hey, if you fancy a ride by bicycle from Setúbal… it’s “only” 10 km!

It’s a good alternative to Galapinhos beach (or the Caribbean, if you will!). As in all the nice beaches near Lisbon, you can expect golden sands here and crystal-clear waters, but with fewer people. It’s a great little cove for snorkeling, walking, or sunbathing!

This beach has more services: restaurants or sun loungers with umbrellas. But although there are more houses built, it maintains the charm of the other virgin beaches in the area as it is inside the Natural Park. It’s one of the most frequented by the locals, and you’ll have to leave the car 2 km away, but no need to walk, because you can just take the free bus! Oh! If the tide is high, stones may bother you when you want to get into the water. If you have water slippers, this is a good place to bring them!

And with this, we finish your express master’s degree in Lisbon beaches. If you venture out to explore this area, be a responsible traveler! We mean, wear a lot of sunblock and leave the beach as clean as you find it, taking everything you bring home with you. Oh, and by the way, remember that these beautiful beaches are in the Atlantic Ocean, that means, the water will be kind of cold! ???? For more Portugal beaches, don’t forget to check the best beaches in Porto and pay us a visit at Cats Hostel Porto!!